The view from Montenegro 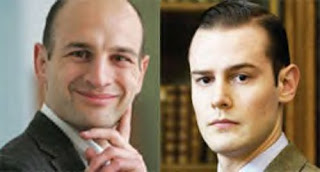 OK, I am back, though it is entirely possible that my temporary absence, caused by other work, has not been much noticed. The other reason for my absence has been a certain inner difficulty: it is hard to summon up interest in the doings of the EU when far bigger and more exciting things are going on in the world.

On the whole, I am happy to write about bigger issues, partly because we are examining Britain's role in the world, which means that the world has to make an appearance in our examination; and partly because our self-defined remit involves a discussion of various countries and organizations. Some of our readers prefer it that we (and they) remain big fish in a very small pond. The problem is that at 5ft 1in it is very difficult to be anything but a herring (though not a sprat) and, in any case, I easily succumb to intellectual claustrophobia.

Still, every now and then, one must turn to the EU and its shenanigans. Therefore, I was pleased to see in Wednesday's Wall Street Journal Europe (there she goes again, unable to stick to solid British newspapers) an article by Borut Grgic, entitled "Europe’s Lack of Strategic Ambition".

Mr Grgic (the one that is smiling in the picture) is, I assume, of Slovenian background, and a graduate of Stanford University. He is the Founder and Director of this particular Institute for Strategic Studies, based in Ljubljana, Brussels and New York. For a small institute it seems to have a lot of addresses but to quote Lady Bracknell in "The Importance of Being Earnest":

My pleasure lessened as I read the article. Instead of tackling the basic problem of a potential EU common foreign policy, Mr Grgic seems to have accepted its main plank. In fact, I had to take issues with his first paragraph, though I approved of the crisp style:

Russia's invasion of Georgia has once again revealed the European Union's central foreign policy flaw: While the EU is good at managing crises, it has hardly ever solved one.

Um, well, half-right, Mr Grgic. It is true that the EU has never (not hardly ever but never, to reverse the Gilbertian line) solved a crisis but neither has it shown itself able to manage one, whether inside or outside itself. Just look at the mess it is making of the problem of Ireland and the Constitutional Reform Lisbon Treaty.

In any case, a foreign policy, common or not is more than just managing crises, let alone solving them. In some ways, it is about preventing crises, though, clearly, that is not always possible. But, in order to have a foreign policy, there has to be some understanding of aim, purpose and interest. Clearly, the EU has none of these and that is why it cannot have a common foreign policy beyond the structures that can be created by agreement.

There is one exception to that – the EU's aim has been, so far, to expand. Like certain very simple animal organisms, such as an amoeba, the great European project can survive only by growing and changing shape. Mr Grgic seems to accept this, as the rest of his article is a discussion as to the harm done by the EU not talking seriously about making Georgia a member – an issue that has not really come up as Georgia wants to be a member of NATO, knowing full well that the EU is not going to be much use against its large neighbour to the north.

Even worse, according to Mr Grgic, the EU seems to have lost its appetite for expansion to the point of not wanting even small and well-run Montenegro.

Rather than embracing this as a strategic opportunity -- since both countries have been advancing fast in their reform and transition efforts, outpacing the regional averages - the EU seems to be embarrassed by their progress. Brussels is looking for ways to shut its doors and keep the ambitious would-be members at a distance, perhaps just long enough so they lose their zealous drive.

True, the recent accession of Romania and Bulgaria has given enlargement a bad name. Brussels sharply criticized Sofia and Bucharest in July for not doing enough to fight corruption and suspended hundreds of millions of euros in aid money. This experience has given enlargement skeptics the upper hand. But punishing Montenegro and the Balkans for the failings of Sofia and Bucharest is unfair and strategically shortsighted.

The EU is missing a huge opportunity to stabilize the broader Balkans and Caucasus regions if it fails to reward Montenegro and Georgia for their efforts. In the first case, it's the EU Balkan agenda that hangs in the balance. Montenegro is a living example of regional success. It never went through a war or ethnic cleansing. Because of its democratic outreach to all of its citizens, it has managed to keep its Albanian minority excited about a future in an independent Montenegro.

The country is making rapid economic progress and moving at a fast-forward pace through the reforms agenda outlined by the EU in its Stabilization and Association Agreement.

Certainly, European countries should make some kind of decision about the Balkans and the Caucasus, the latter, in particular, being a tinder box ready to blow. There is, furthermore, the question of energy supplies. The need to diversify includes the need to get gas and oil without any Russian interference, as the country has shown herself to be less than reliable in every way.

To assume, though, that the only way to achieve these objectives is by expanding and, necessarily, strengthening and centralizing the European Union indicates that Mr Grgic has not really studied the situation and all its possibilities. One wonders what his Institute really does for research.
Posted by Helen at 00:52