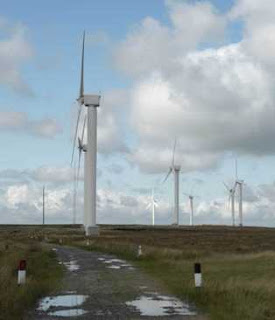 On the back of the BBC having a go at subsidy wind farms, we now have The Sunday Telegraph joining the battle.

This paper is retailing a report from the Renewable Energy Foundation (REF) which asserts that wind is failing to deliver value for money and distorting the development of other renewable energy sources. Furthermore, excessive subsidies make them an expensive and inefficient way of reducing greenhouse gas emissions.

The report is actually written by John Constable, of REF, and Robert Barfoot, the chairman of the North Devon branch of the Campaign to Protect Rural England. And even this has a greenie tinge as they say the subsidy scheme is encouraging energy firms to build as many wind farms as possible because it is more profitable than investing in other more expensive forms of renewable technology, such as wave power.

Actually, the main problem is that the generosity of the subsidy scheme is diverting cash from investment in longer-term schemes such as nuclear, and also driving generators to invest in increasingly expensive gas, this being the most suitable back-up for wind.

Nevertheless, the report authors say: "The market for renewable energy is an artificial one created and maintained by government legislation. The question is whether this consumer-derived money is well spent. It is worth noting that the excessive subsidy offered to onshore wind development has drawn developers even to sites where the wind resource is very weak and the environmental impact severe."

As it stands, there are 176 wind farms operating 2,033 turbines onshore and at sea, earning approximately £223 million in subsidies. In addition, there are another 235 wind farms in the planning stage which would see 3,189 turbines, many more than 400ft tall, installed by 2013. By 2020, with 25GW installed, the subsidy could reach £6 billion a year.

As an example of the way the rip-off works, pictured above left is one of the existing subsidy wind farms – 23 x 400 KW turbines at Ovenden Moor, on the bleak flanks of the Pennines just outside Halifax. Built in 1993 at the cost of £10 million with the aid of an EU grant of £1.3 million (approx), last year the installation earned for its owners, E.on, a cool £1,004,850 in Renewables Obligation Certificate (ROC) subsidy, recovered by a surcharge on electricity bills. 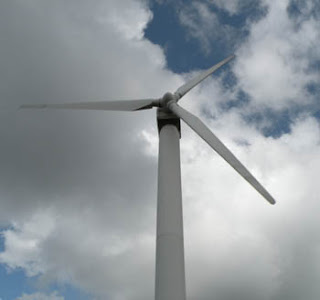 This is an installation rated at 9.2 MW, theoretically capable of producing 80,592 MWh but, with a load factor of only 27.71 percent, it actually produced 22,330 MWh. At today's inflated wholesale price of £85.58 MWh for electricity, that output would earn £1.9 million in sales, potentially earning the installation just short of £3 million a year when the ROC subsidy is added. For an investment of less than £9 million, this is an extremely attractive rate of return and it is thus easy to see why generators are piling into wind.

Unsurprisingly The Sunday Telegraph also gives space to Booker for a comment piece, where he calls wind farms, "One of the great deceptions of our time".

Gradually, the message is beginning to sink in. With subsidy wind farms already growing in unpopularity, people are now waking up to the gigantic scale of the rip-off being perpetrated. As more and more people begin to understand this, it should only be a matter of time before the whole programme crashes and burns.

But, there is one minor problem ... wind energy is an EU-supported obsession. To stop the scam, we have to confront the EU. Is there a politician brave enough to do this?