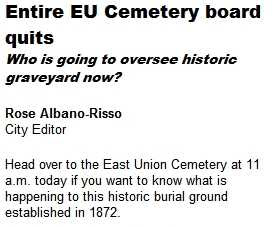 I must admit that this headline (left) worried me. As a supposed "expert" on the EU, I was taken aback by my not having been aware of a major EU institution. How could I possibly have missed it?

Then we have what appears to be a major political scandal. The entire board resigns? What gives? In this a re-run of the Santer commission drama?

Alas, closer scrutiny of the report reveals an altogether different, more mundane story. But it does point to the existence of an innocent world – deliciously parochial – where those two letters "EU" do not invoke dread and hatred in equal measure.

Give it time though. No doubt, in the deeper recesses of the Berlaymont, grey functionaires are already working on their own version of an EU cemetery board – the "European Post-Life Sustainability Agency" (EPLSA)? Having messed up our lives, they will drive us into our graves.

Of course, the obvious response is, "After you, Jacques"!