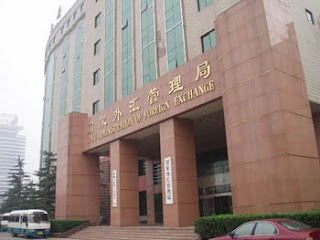 The Financial Times has come up with a corker today, finding the "smoking gun" which proves that the Chinese government is using its massive $1,800bn foreign exchange reserve pot for entirely political purposes.

Big deal, you might say. This has always been suspected and it is exactly how you would expect a totalitarian government to behave. But suspecting is one thing – proof is another.

What the FT has found is that China's State Administration of Foreign Exchange (Safe) - the secretive government agency that supervises China's foreign exchange reserves (pic shows the HQ in Peking) - used its funds to help convince Costa Rica to sever ties with Taiwan and establish relations with the Chinese government.

Encouraging the handful of countries that still recognise Taipei as the legitimate representative of the Chinese people to switch their allegiance is a key foreign policy objective for Beijing, which regards Taiwan as a renegade province.

In pursuit of this objective, last year the state agency bought up $300m in government bonds and made a grant of $130m to the government of Costa Rica. This was part of a secret agreement under which the Central American nation cut diplomatic ties with Taiwan (after 63 years) and established relations with the People's Republic of China.

The FT cites Kerry Brown, senior fellow with the Asia programme at Chatham House in London, saying: "This is the first smoking gun that proves China uses its foreign exchange reserves for political purposes." He adds: "It raises questions about some of Safe's other investments and will worry politicians and business people in places where Safe is taking stakes in high-profile companies."

And they would be right to worry. Safe’s international profile is relatively new. More normally, it uses anonymous offshore subsidiaries to buy small stakes in publicly listed companies. Recent acquisitions include shares in BP, Total of France and at least three Australian banks.

But another, more recent acquisition was a stake in Yorkshire's Drax Group, which runs Britain's biggest coal-fired power station near Selby.

The People's Bank of China has acquired a 0.7 percent stake in the group, worth an estimated £18m. The stake was acquired quietly as it fell below the three percent disclosure threshold to which London Stock Exchange-listed companies must adhere. It typifies the way the Chinese government is acquiring stakes in strategic western assets.

In this case, the Drax group was believed to view the Chinese shareholding as a long-term investment rather than the start of an acquisitive stake-building exercise. But, the FT piece today demonstrates that, when dealing with the Chinese, one can never discount political considerations, which are likely to be the dominant factor.

Like tanks and guns, money in the right hands is a potent weapon and, it appears, the Chinese government is not afraid of using it.