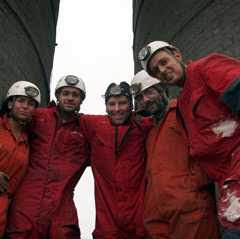 Advocates of jury trials may have cause to ponder at the verdict delivered at Maidstone Crown Court today on the "Kingsnorth six" – the Greenpeace vandals activists who today escaped conviction for causing £30,000-worth of damage to the power station chimney last year.

This, of course, was the trial where James Hansen gave evidence and, as Reuters reports, the six had claimed by way of defence "lawful excuse".

They argued that they were acting to protect property around the world "in immediate need of protection" from the impacts of global warming climate change, caused in part – or so the Greenpeace website says - by burning coal.

The verdict was delivered by the jury after the judge said he would accept a majority verdict, with Ben Stewart, one of the six, happily chirping, "This verdict marks a tipping point for the climate change movement," then adding: "If jurors from the heart of Middle England say it's legitimate for a direct action group to shut down a coal-fired power station because of the harm it does to our planet, then where does that leave government energy policy?" 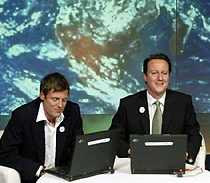 Where indeed, he might ask. But where also does this leave the Conservative Party. Aside from James Hansen, another prominent witness was Zac Goldsmith (pictured with David Cameron). He still styles himself as David Cameron's "environmental policy adviser", and is cited on the Greenpeace website saying there was "a staggering mismatch between what we've heard from government and what we've seen from government in terms of policy".

Thus, on the face of it, we have Greenpeace and the Conservative Party singing from the same hymnsheet, their common "advisor" justifying criminal damage to the property of an energy company.

Unless Cameron acts swiftly, formally to distance himself from Zac Goldsmith, it must be assumed that the leader of the opposition, if not actually endorsing the Greenpeace action, has not disowned it. That, in itself, would speak volumes for Mr Cameron's championship of "hard working families" and their need to obtain cheap, reliable electricity supplies.

For that matter, let's see what the Tory-supporting blogs think of it. It will be interesting to see whether they ignore the issue completely and thus also tacitly endorse the action of their leader's "advisor".