All a little unpredictable 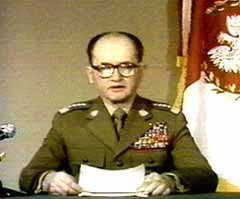 As we all know, many of the people in high positions in former Communist countries, including their representatives in EU institutions, are not just erstwhile members of the Communist party but people who had had high position in it or, not infrequently, in the security services of the countries in question. The latter is of some importance because anyone who had risen high in the East European secret service would have been trained in the Soviet Union.

For various reasons, not least the fact that Communism deliberately involved as much of the population as possible in the running of the system, full lustration has never been possible and has been deliberately avoided by most political parties.

Poland has decided to break with that in a way that may rebound on the government though, undoubtedly, it seemed like an easy target, unlike, say, the unravelling of the truth around Lech Walesa.

The BBC reports that General Jaruzelski is to go on trial for imposing martial law on the country in 1981 and clamping down on all opposition, including the trade union movement Solidarity. Dozens of people were killed and many more imprisoned. Also, the left in the West, particularly in Europe was once again shocked by the intolerance of the Soviet system. Ah well, live and learn, except that they never do.

The general, who is 85 and in poor health, is being tried with various colleagues of his. The defence is that if he had not imposed his own military rule the Soviet Union would have invaded or, to be quite precise, would have sent many more troops in to bolster the existing contingent stationed in the country and would have imposed order far more brutally.

It seems, according to the BBC, that many people in Poland do believe this and that is why the belated prosecution may not be as popular as the Polish government hopes. The time to have done this was immediately after the fall of the Communist system. For various reasons the Solidarity government decided not to go after Jaruzelski then. 15 years and many other problems on it is probably too late.
Posted by Helen at 13:37