The struggle over power 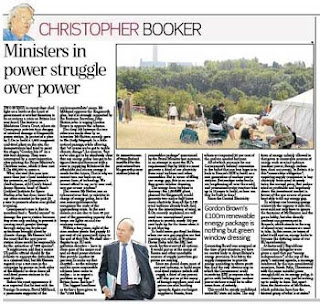 Over on Centre Right, Matthew Sinclair posts a short article on the energy crisis, telling us that The Renewable Energy Foundation (REF) are "one of the most important organisations in politics today."

Their work, he writes, sets out the scale of the challenge for energy policy. Clearly, no one has any excuse not to appreciate the trouble we're in. How a decade of believing in the fantasy that a combination of gas and renewables can reliably deliver the power we need has created a serious danger of the lights going out.

However, we do get a quote from Campbell Dunford, with which we can entirely agree. Campbell is a former international energy banker and now Chief Executive of the Renewable Energy Foundation. He says,

There are two parallel debates here. On the one hand the energy experts tearing their hair out with anxiety, and on the other the bland Westminster discussion typified by the Prime Minister's empty and trivial gestures. This must change. Only courageous leadership can prepare us for the gathering storm. Will Mr Cameron speak up and confront the realities, or will the realities get there first?

It is in that latter sentence that the problem lies. Our politics are essentially adversarial. The contest between rival philosophies, different viewpoints and their respective political champions fuels debate and drives the media agenda. Without that, issues remain consigned to the technical and business pages and do not enter the political mainstream.

It is thus Mr Cameron's silence and the lack of activity from his shadow team that is doing the damage. For sure, any opposition, compared with the reach of the government, has limited power. But it is able to keep issues on the agenda and widen out the discourse.

That it is an issue of great public interest is well evidenced by the Booker column today, which picks up on the themes raised by this blog last Thursday, and in particular the malign role of the European Union in stifling any attempts we might make to forge a rational energy policy.

The piece we wrote them was headed "the enemy within", focusing on the greenies, but in a sense the greater enemy is the indifference of the political classes and their willingness to cede the debate to the greenies without any effective challenge.

Something of that can be seen from events in Scotland, where the SNP has totally bought into the greenie mantra, with a key energy company now warning of the potentially disastrous effects.

This is conveyed by the Scottish edition of The Sunday Times but we are seeing exactly the dynamic about which we have just remarked. Although an intensely vital political issue, this is printed in the business pages. And, to prove the point, the story is also in the Scotland on Sunday, again in the business pages.

Anyhow, the thrust of the story is that British Energy is about to predict that Scotland will be energy importer by 2025 "if it does not build three new, low-carbon power plants". The region faces a massive hole in its energy supply, equivalent to the output of three power stations, if it relies solely on renewables – having to rely on nuclear generated power from England to plug the gap.

British Energy is not pushing nuclear. Its spokesman is saying that power does not need to come solely from nuclear, but the policy should allow the competitive market to choose which low-carbon, affordable conventional plants are built. All options should be available.

But what is absolutely staggering is the response of the Scottish government, which airily dismisses BE's warning as "nonsense". "Scotland does not want or need costly new nuclear power stations and is already well on its way to becoming the clean, green renewable energy capital of Europe," its spokesman says.

There is something dreadfully wrong when a government feels able to reject the technical opinion of a leading energy supplier – even more when it does so in such a cavalier fashion.

Given what we know about the unreliability of wind power, which even factions in the BBC seem to understand, the Scottish government's dismissal is in any event not plausible. Its aim of relying entirely on renewable energy is profoundly and dangerously wrong, and demonstrably so.

Under the circumstances, its reaction has to be a special kind of madness. It is beyond grandstanding or hubris. No sane government could so easily and recklessly endanger its own population and put its entire economy at risk.

And neither is this particular little episode just a Scottish issue – although, typically, reporting is confined to the papers across the border. At the moment, Scotland is a net exporter of power to England so, if the energy supply there fails, we all suffer.

Needless to say, the utter failure of the political classes and the media to engage in this issue is intensely frustrating. But there is a bright side. While some blogs have been reporting a fall-off in their hit rates, as we have intensified our "banging on" about energy, our hit rate is showing a modest but sustained increase. It is good to see that some of our Umbrellog partners are also piling in, with Tony Sharp and John Page doing some good work. So, incidentally, is the Open Europe blog, which is quietly growing in stature.

Clearly, there is an intelligent readership out there which is tiring of the daily fare of the "tee hee" blogs, with whom we have struck a chord. In an earlier piece, I wrote about energy being the defining issue in our relationship with the EU but it could well be the defining issue for the political blogosphere - those sections of it that are capable of picking up the challenge.

With the politicians and the media unable or unwilling to engage sensibly in this vital issue, this – as with climate change – is a subject where the blogs can and should make the running - fortified, of course, by Booker in his own ghetto in The Sunday Telegraph. We, for our part, will continue banging on, for as long as you continue reading what we write.