Do they have a conscience? 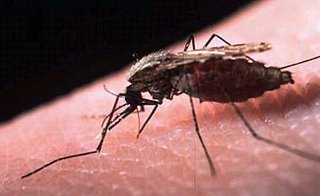 Despite the EU's reservations, which have engendered delays of several years, Uganda has decided that it will proceed with the use of the pesticide DDT to control malaria.

Yet, even now, with the disease killing between 70,000-110,000 children annually in Uganda alone and causing massive economic losses, the EU is still havering over pesticide residues in the country’s agricultural exports, and threatening that they could be excluded from EU countries.

According to the Nairobi newspaper East African the head of the Economic, Trade and Social sectors desk at the EU delegation to Uganda, Tom Vens, has warned the government against the use of DDT.

This is an issue which we have covered before (here and here and represents one of the darker sides of EU interference in Africa, effectively condemning to death hundreds of thousands of Africans.

Finally, though, Uganda's Health Minister, Jim Muhwezi, has had enough of the slaughter. He has declared that his country is going ahead with DDT usage regardless. "What we plan to do is within the agreed framework of the World Health Organisation and there is nothing new in this," he says. "We shall use Indoors Residual Spraying and this means it will not come into contact with the exports."

This was what was originally planned and despite good evidence that it would have no effects on crop residues, it has still met with EU resistance. However, Muhwezi is fortified by a study released in November 2005 which found no link between DDT and conditions such as impotence, infertility, neurological damage, congenital abnormalities and cancer – despite assertions to the contrary from EU officials.

Uganda can no longer afford to allow the EU view to prevail. Malaria kills more people than any other disease in Uganda each year. It is responsible for 21 percent of hospital deaths and 40 percent of illness in the country's health facilities.

Nonetheless, there remains some nervousness about the EU reaction. Uganda's agricultural sector contributes about 36 percent of the gross domestic product, and Europe is an important export destination for fish, coffee, fresh flowers, bananas and cotton.

It comes to something, however, that Uganda has been confronted with the choice between mass deaths and economic disaster and it is a reflection of how serious the situation has become that it has taken the brave move to reintroduce DDT.

Without EU threats, that decision would have been taken years ago, which puts the responsibility for the rising toll of deaths directly at the door of EU officials. One wonders if they have a conscience.