Continuing with the theme 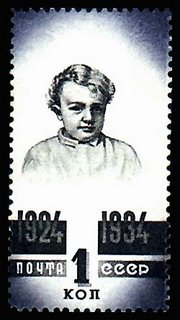 Our readers will be pleased to know that the theme is not the Boy-King. Instead, I am picking up the subject of environment and anniversaries. Today is not only the anniversary of this blog’s beginning (and of Pravda's in 1912) but it is also the birthday of V. I. Lenin, without whom there would have been no Pravda or many other things in the twentieth century.

Then again, it is also Earth Day (I guess, Earth can survive idiotic “days” of that kind). Since 1970, as today’s Wall Street Journal points out, the day has been marked as a reflection on the state of the environment.

As part of that reflection, the article gives some figures:

“Since 1970, carbon monoxide emissions in the U.S. are down 55%, according to the Environmental Protection Agency. Particulate emissions are down nearly 80%, and sulfur dioxide emissions have been reduced by half. Lead emissions have declined more than 98%. All of this has been accomplished despite a doubling of the number of cars on the road and a near-tripling of the number of miles driven, according to Steven Hayward of the Pacific Research Institute.”

In various other ways the environment, certainly in the developed countries and even in the more advanced developing ones is getting cleaner. This has been acknowledged by various organizations but the Green lobby, instead of feeling triumphant, is getting more and more hysterical and not a little ridiculous.

“This year, for example, Vanity Fair has inaugurated an "Earth Issue," comprising 246 glossy, non-recycled pages of fashion ads, celebrity worship and environmental apocalypse. Highlights include computer-generated images of New York City underwater and the Washington mall as one big reflecting pool. The magazine also includes a breathless essay by U.S. environmental conscience-in-chief Al Gore. The message is that we are headed for an environmental catastrophe of the first order, and only drastic changes to the way we live can possibly prevent it.”

Al Gore is not a lucky politician, not just for the obvious reason of what happened in 2000 but in his campaigning about environment, fossil fuel and oil companies. There is, for example, the undoubted fact, that for many years both he and his father worked for Armand Hammer, a man responsible for a good deal of fossil fuel production.

Then there was the time when Gore gave a crucial (to him) speech in New York about the dangers of fossil fuel usage and the evilness of oil companies. Alas, he chose a day that turned out to be the coldest for several years and most New Yorkers were all too grateful to the oil companies.

Now he is about to release a shock-horror “documentary”, which tells us in graphic and highly imaginative detail that the dangers of globalization are greater than those posed by terrorism and can be compared only to those posed by Nazism in the thirties.

I have a feeling that he will turn out to be unlucky again. The Greens have a credibility problem.

“But as Mr. Hayward notes in his "Index," the environmental movement as a whole has developed a credibility problem since the first Earth Day 36 years ago. In the 1970s, prominent greens were issuing dire predictions about mass starvation, overpopulation and--of all things--global cooling. Since then, population-growth estimates have come way down, biotechnology advances have found ways to feed more people than the doomsayers believed possible, and the global-cooling crisis has become the global-warming crisis without missing a beat.”

As we know global warming has become a new religion with Kyoto as the Nicene Creed. There have been disgraceful campaigns waged against scientists who have expressed scepticism about this unproven and unargued faith; an attempt to silence all those who are not of the true religion; a refusal to listen to economic arguments from either the developed or the developing countries.

All the same, voices are being heard that say: look at the evidence. Not only the environment is getting cleaner because we can afford to make it so, but it is clear that the best way forward is through private property, private enterprise and better technology.

Global warming is not precisely happening at the rate that was predicted. A rise of 0.7°C in 150 years is not a catastrophe by any standard and is no different from previous climatic changes. Its causation by human activity remains unproven. But none of that is of any importance to the true fanatic.

“Thus the cause of global warming has come at a fortuitous moment for clean-air warriors looking for alarms to ring. It is global in scope, will take decades to come to fruition--or to be revealed as another false alarm--and provides endless opportunities for government intrusion into the economy. It is, if you'll pardon the deliberate reference to a faith-based phenomenon, the green equivalent of manna from heaven. Or would be, if the greens hadn't spent so much time over the last three decades talking up scares that never came to pass.

This credibility deficit, combined with the slow-motion nature of the putative warming, has led to some desperate tactics by the global-warming true believers. To cite just one example, careful expounders of the idea of human-caused global warming used to take pains to distinguish between "climate" and "weather." Thus, snow storms in April or cold snaps in September were merely "weather" and told us nothing about long-term trends.

Then Katrina hit the Gulf Coast, and the environmental movement pounced. The image of an American city filled with water proved irresistible to those who have been warning for years about rising sea levels--never mind that the cause was one unusually powerful storm and that New Orleans was built below sea level in the first place. As Mr. Gore puts it, Katrina "may have been the first sip of a bitter cup which will be proffered to us over and over again until we act on the truth we have wished would go away." If that language sounds familiar, that's because Mr. Gore borrowed the image from Winston Churchill, who used it to describe the Nazi menace in Europe in the 1930s.”

The trouble is, most of the rest of us can see through this nonsense and understand it for what it is: another campaign by various governments and, above all, transnational bureaucrats to impose endless regulations on the rest of us “for our own good”.