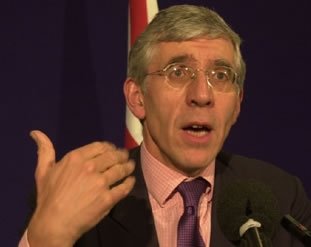 Presumably, it was a pure coincidence that Foreign Secretary Jack Straw chose Hitler’s birthday to announce that the UK is prepared to overlook Hamas’s intransigent attitude to Israel. (Well, it is also Harold Lloyd’s birthday, the day on which the Curies isolated radium in 1902 and the Red Army entered Berlin in 1945.)

Travelling round the Middle East Foreign Secretary Straw said that, of course, Britain would prefer it if Hamas recognized Israel’s existence but, really, there was no need to make too much of a fuss about it. Certainly there need not be any kind of announcement or changes in Hamas’s charter.

“Referring to a Hamas recognition of Israel, Straw stressed he did not expect a formal declaration by the group's leaders. According to Straw, Hamas must accept Israel's existence as a fact, but a change in the organization's charter that calls for Israel's destruction is not a necessary condition for negotiations between the two sides.”

Oh that’s nice. Negotiations between whom, precisely? Hamas says Israel must be destroyed and, therefore, there is no point in negotiating; Israel says that it cannot negotiate with an organization, whose aim it is to destroy the country. Something of an impasse, most people would call it.

The point is not in the negotiations but in money. Straw is preparing to hand over British taxpayers’ money to the Hamas-led PA (remember that funds for humanitarian projects had never been cut off, though how much they achieve remains questionable) with the usual proviso:

“Straw suggested that Britain renew fund transfer to the Palestinians, and that international monitors will work to oversee the financial transactions and see to it that the money is not used by terrorists.”

That’s always worked so well in the past. Whatever happened to all those millions that had gone to the late unlamented Chairman Arafat and his friends and relations, not to mention the Al-Aqsa Martyrs’ Brigade?

The timing is perfect. A couple of days ago we had another major suicide/homicide attack in Tel Aviv. Admittedly, it seems to have been done by an ex-member (very ex after the attack) of Islamic Jihad but Hamas immediately proclaimed its support and, later, demanded an apology from Mahmoud Abbas because the man had actually condemned it.

Meanwhile, another player is making itself heard. If there is one country that is not going to sit back and do nothing when the Israelis pull out from the West Bank, it is Jordan. Back in the late sixties and early seventies, the Jordanians had experienced the joys of PLA (the predecessor of all these different organizations) presence in their country.

It all ended badly – for the Palestinians. In September 1970 after various attempts to assassinate King Hussein and take over large areas of Jordan, martial law was declared and the Jordanian army attacked the PLA headquarters in Amman and swept through various Palestinian camps. When Syria tried to help the PLO, Jordan requested and got American and Israeli help. But most of the fighting was done by the Jordanian army and by September 27, it was all over.

The number of Palestinian casualties were estimated at between 3,000 and 5,000, far greater than any Israel has inflicted at any one time. Though King Hussein and Arafat signed an agreement in Cairo on September 27 that allowed Palestinian groups to operate in Jordan, this was superseded by another agreement on October 31.

This one returned control over Jordan to the King, requiring the dismantlement of Palestinian militant bases and banning their members from carrying unconcealed weapons.

This and subsequent agreements were consistently broken and a war raged between the Palestinians and the Jordanian army until January 1971, when the army regained full control of the country, Fatah and the PLA had to withdraw to Lebanon (with dire results for that country) and Jordan survived. Number of casualties? Probably tens of thousands.

The reason for this historic digression is that Jordan has made an interesting discovery.

“In the latest political headache for Hamas, Jordan has announced that it has uncovered a cache of Hamas weapons in the country and postponed a visit by the Palestinian foreign minister, Mahmoud Zahar, who is also a senior Hamas leader.”

Hamas is denying the accusations, insisting that it does not interfere in the internal affairs of other Arab countries, fighting only Israel. King Abdullah and his government, it seems, beg leave to doubt.

“Hamas is calling on Muslim countries to step in and provide additional assistance, but so far the response has been tepid.

So you see, it is absolutely essential that the British taxpayer steps in and provides funds for this peaceful and delightful organization.