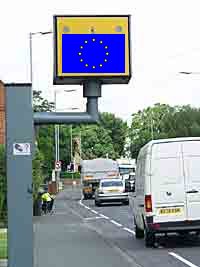 One of life's difficult choices is working out which I hate more – the EU or speed cameras.

The latter feature particularly highly in my life at the moment, not only because I have just paid off Mrs EU Referendum's speeding fine but because I am teaching EU Referendum Junior how to drive.

This has meant frequenting camera-infested streets which I usually avoid, while insisting that Junior at all times obeys the speed limits – a classic case of "do as I say, not what I do".

What has been particularly striking about this experience is discovering how difficult is to know what the speed limit is at all times. Firstly, it is impossible to gauge from the type of road what the limit might be. You get four lane carriageways, with generous grass verges and no housing in sight, the limit inexplicably set at 30 mph, while some narrow urban roads, lined with parked cars, can have a forty limit.

Secondly, one notes how poor the signing is – and how few signs there are. Many are in disrepair – one I spotted was so old, the red ring round the number had completely faded – and many are concealed by foliage or other obstructions. I have commented, rather sourly, that if the authorities spent a fraction of the money they spent on cameras on improved signing, then compliance rates would shoot up.

One other thing I have found is that Junior, having taking multiple lessons with a professional driving instructor, is so imbued with the necessity to keep to the speed limits, that he will quite happily bowl down roads nicely on the 30 mph limit, feeling pleased with his performance, when the particular circumstances demand a maximum of 15 mph or less.

Anyhow, at least one problem is about to be resolved. In its consultation document issued this week, on its CARS 21 Report, (Competitive Automotive Regulatory System for the 21st Century) the EU commission has signalled its intention to take a much greater role in road safety. It intends to include in its roadmap, "measures to improve the enforcement of bans on drink-driving, the enforcement of speed limits and the promotion and enforcement of seat-belt use and motorcycle helmet use."

As with the morons which masquerade as road safety campaigners in this country, the EU is obsessed with the mantra "speed kills", promoting the falsehood that speed is a factor in about one-third of fatal and serious accidents, when it is actually about seven percent. Furthermore, the bulk of speed-related accidents occur at speeds within the posted speed limit, so that it is "inappropriate speed" rather than speed, per se, that kills.

Thus, the EU will bring no improvement to road safety and, as it takes its greater role in projecting road safety myths, and progressively assumes responsibility for speed enforcement standards, we can transfer our detestation from the imbeciles who are at present destroying road safety, and direct it at the EU.

From their perspective, the "colleagues" may think it is a good idea to take over road safety but with that will come the unpopularity currently reserved for the likes of camera partnerships. Clearly, they know not what they do.