You have been warned 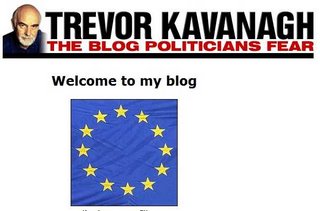 You have to sympathise with the EU groupies. When it comes to grabbing the headlines, how can they possibly compete with Johnny "two shags" and the NuLab cock-up show?

At least, though, Trevor Kavanagh of the Sun – in his new blog - is warning us not to drop our vigilance, telling us that "the EU is quietly trying to revive the discredited Constitution by the back door."

I think we might have mentioned that once or twice, but it doesn't hurt to have Kavanagh pitching in on the side of the angels, even if he is unlikely to understand the nuances of the process – or even care less.

Nor do we even mind if he tells his readers to "try logging on to Open Europe's excellent website which keeps an eye on every new twist in the saga of an ever-deeper European Union." The more hands to the pumps, the better.

However, Open Europe's contribution amounts to reading the Financial Times which, this week, reported that "EU leaders are planning to extend the 'period of reflection'" on the EU Constitution after failing to agree on how to revive the text. Kavanagh thus cites Open Europe citing the Financial Times citing Ursula Plassnik, Foreign Minister of Austria, who says (or said): "This issue cannot be settled satisfactorily and conclusively for all 25 member states at the present time."

"Formal talks on reviving the Constitution," continues the FT, "might start after French elections in the summer of 2007, continuing into 2008 when the EU starts a review of its budget."

"You have been warned!" crows the vigilant Kavanagh.

Actually, we seem to have been saying, as early as last May – after the French "no" vote – that there could be no serious attempt to reintroduce the EU constitution until after the French presidential elections in 2007, and we have said it several times since.

Moreover, the very fact that this has now been acknowledged by the EU élites represents something of a set of setback for them. As the IHT reported, plans were afoot to try to revive the constitution at the European Council in June, under the aegis of the Austrian presidency.

Thus idea, though, has been abandoned, as has any hope of the increasingly Eurosceptic Finland taking on the issue when it takes up the presidency in the second half of this year. That leaves Germany in the New Year but, by then France will be in the throes of the its presidential campaign and it will be impossible to get any commitments from what will almost certainly an outgoing Chirac.

Then should the socialists steal the crown from Sarkozy – which is looking increasingly possible – so split is the Left on the EU constitution that it would hardly want to re-open old wounds at the outset of its reign. The chances are, therefore, that inconvenient European issues will be put on the back-burner.

That leaves José Manuel Barroso, the EU president who is expected to tell his gifted team that the EU is probably going to have to wait for serious talks until 2008, having conceded that, "The debate in recent months has shown that Europe is not yet ready for a constitutional solution."

All that is left to Barroso is to offer a "three step plan" which will be unveiled on 10 May – the day after "Europe Day" – almost certainly to a completely indifferent world.

Step one, we are told, is "a push for a concrete policy driven agenda and progress on key proposals, such as an EU energy policy or Europe's push for economic growth." Sounds a bit like Lisbon revisited… again. If yawns were euros, the EU would be rolling in money.

Step two is next year's 50th anniversary of the EU's founding 1957 Treaty of Rome. This will be a "convenient and auspicious moment to reassess the EU," say officials. More navel-gazing, it seems.

As to the third step, is the start of the discussion on financing, midway through 2007 to 2013 budgets, and Barroso is suggesting that this might be the time for a new treaty. But there again, it might not. If a week is a long time in politics, two years is an eternity.

By the time 2008 arrives, the whole of the political landscape of Europe could have undergone huge change, making the situation highly unpredictable and any plans extremely tentative. Thus, the big problem for the commission, as we see it, is trying to keep interest going, when the future looks so uncertain.

Our problem will be to keep European Union issues on the national agenda, when there are so many politicians only too keen to exploit the hiatus by letting the debate fade into obscurity. You have been warned.