The only alternative is violence 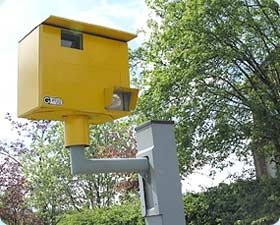 This week, I put a cheque in the post, to the sum of £100, made out to Her Majesty's Court "Service" (although it has long ceased to have anything to do with Her Majesty) in payment of a speeding fine.

Not, I hasten to say, my speeding, but for Mrs EU Referendum, who in a moment of distraction, became one of the millions of motorists who fell foul of those evil yellow boxes which litter our roadside and make driving a nightmare.

With the cheque, however, I enclosed a cutting from the local newspaper detailing an episode in which a local toe-rag, having killed an elderly resident in his car, had been disqualified but had escaped prison.

He had then been caught driving while disqualified, having sought to evade the police by driving at up to 80 mph through built-up areas, zoned at 30 mph, and had only been "awarded" community service which – from past form – he would most certainly fail to complete.

It is with some interest, therefore - to put it mildly - that I read the Focus piece in The Sunday Times headed "One law for them, one law for us" by Richard Woods. This spells out at some length the thesis presented by a new book which says that "while petty crime is being rigorously prosecuted, serious offenders are not."

The piece chooses for its illustration the fate of David Langton, "a law-abiding citizen" who keeps getting into trouble. His crimes, says The Sunday Times, are to drive, to park, to be an ordinary person who makes occasional mistakes. In the past year he has had his car towed away from outside his home when the parking bay was suspended; he has been caught by two "safety" cameras when driving a few miles an hour over the speed limit; and he has twice been fined for forgetting about the London congestion charge.

The contrast is then made with some egregious offenders who, despite committing shocking crimes, have effectively "got away with it", thus proving the thesis that author, David Fraser, makes in his book, A Land Fit For Criminals.

Now, I can already hear the bleating of those who say that "if you didn't break the law, you wouldn't have a problem", which matches the moronic litany of those who blather, "the law is the law and must be obeyed".

In my reasoned way, let me counter with a simple illustration. Food hygiene regulations – which I used to enforce – require wash basins to be provided in commercial food premises, equipped with various facilities like soap and towel.

Totting up the various technical requirements, I once calculated that is possible to commit no less than 20 technical breaches of the law in respect of each and every basin in a food premises, to the extent that it is virtually impossible for any busy premises to be in full compliance.

By that measure, it is relatively easy for the trained observer to walk into any commercial food premises and pick up at least 100 technical "offences", each one of which in a court of law could attract a penalty of £5000.

To avoid such a ridiculous outcome – where the owner of every food shop in the land was forever in the courts – it is necessary for enforcement officers to use their judgement. They should prosecute only where there are serious breaches, and where the object of the regulations (improving hygiene) is best served. More often, the threat of prosecution is a more powerful weapon, and a case never comes to court.

In other words, there are two parts to the "law", the written code and the enforcement code. For a law to be just and workable, the two must work together and in harmony. The written law itself is not a mandate to prosecute every offender, however petty – therein lies tyranny.

But, as elected councillors have become more detached from the administration of their councils – as Booker adequately testifies in his column today - we get "rule by officer" in the increasingly managerial style of governance, about which my colleague has written so lucidly.

And, as the officials take over, elected politicians – whether they be councillors, MPs or even MEPs - have less and less relevance, and are seen merely as ciphers, rubber-stamping the decisions of their officers (or unable to bring them to account).

Thus do people retreat from the political process and democracy takes a slide, bring the current calls for state funding of political parties, which Simon Jenkins today so thoroughly condemns. "Not a penny more of public money" should be directed at them, he writes. "Let them sweat."

Interestingly, he goes on to write that, "since taxpayers are not privy to this conspiracy against the exchequer the only redress may yet be rioting in the streets," a somewhat whimsical thought but one which increasing numbers of people are wishing would happen – to the extent that, as Patrick Stewart might have said, they intend to "make it so".

That is where we are heading.