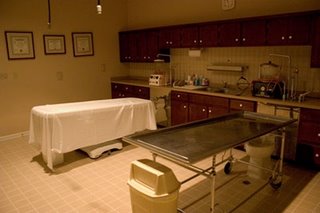 The Times today runs story on how undertakers are "to lead protest as Brussels seeks chemicals ban", telling us that the ancient traditions of the Irish wake and funeral are under threat from Brussels.

This is according to the Republic’s governing Fianna Fail party, which has said that "final farewells to the deceased as they lie in open coffins could be ended by Stavros Dimas, the European Union environment commissioner, who wants chemicals used by embalmers withdrawn under a new biocides directive."

As far as it goes, this is old news in the sense that it was run in the Irish papers last month, and picked up by blogger Slugger O’Toole on 30 March.

Throughout, though, it has been treated as an amusing curiosity and an Irish cultural issue, with very little technical elaboration of the issues involved.

At the heart of the problem is the EU’s Biocidal Products Directive 98/8/EC, which appears to be creating problems with the use of formaldehyde. It is the intention of the directive, we are told, to withdraw agents, such as formaldehyde, without which it is not possible to carry out embalming.

However, the directive does not specifically mention formaldehyde and the mechanism by which it will be withdrawn is uncertain. No more information is available from the newspaper – which has basically copied out the story from the Irish press.

That aside, there is much more to the Biocide Directive, which is causing havoc in no end of industries, creating considerable increases in costs. The industry, for instance, estimates that it will cost at least €5 million to register a new product under the directive, and that is before the costs associated with funding extensive R&D programs and investing in new plants and processes are considered.

Furthermore, of the estimated 1500 known biocidal active agents currently in use, such is the expense of registering products that only some 370 have been notified under the directive and many perfectly good products will fall by the wayside. For others, the concentrations at which they can be used are so low that they cease to be effective.

Altogether, therefore, there is much more to this than a simple "tee-hee" space-filler about Irish undertakers, about which we are being told nothing in the popular press. But then, what else does one expect from the MSM, other than sloppy journalism.