No direction but down 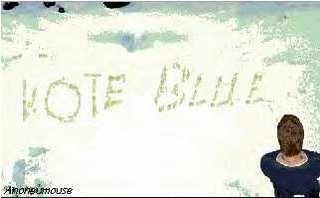 I do not think any of us could have believed quite how bad the Boy King would turn out but, if the YouGov poll in The Telegraph today is any guide, he has blown it completely.

Following on from the Spring Conference in Manchester, where the DOYK (Don’t Overfill Your Kettle) Party has hardly been out of the headlines, if it was going to capture the hearts and minds of the great unwashed, now was the time. Instead, DOYK has managed to produce a distinctly lacklustre 33 percent, trailing woefully behind ZaNu Labour at 35 percent.

If that is not dismal enough, the really crucial figure is the "don't knows". These stand at an incredible 40 percent, up from 19 at the general election. This may indicate that voters have yet to make up their minds but the more probable explanation is that they reflect the "none of the above" tendency. Given a choice between a discredited, sleaze-ridden Blair and the Boy King dressed up in a duvet and driving a dog-mobile, voters are turning away in their droves.

Not so the BNP, it seems, which are storming in from nowhere at seven percent – hoovering up UKIP votes on the way - indicating, as Anthony King puts it, "a restless and unpredictable electorate."

That is only one way of putting it. A less generous – but possibly more accurate – way might be to venture that the electorate is mightily sick of the vapid posturing of the political élites and has pronounced a plague on all their houses.

Over the last few weeks, we have read (and listened to) innumerable, laboured commentaries on what the established political parties much do to counter the BNP "threat" but none seem fully to have grasped the nature of the phenomenon confronting them.

Thus, while it seems that the Boy King is seeking to convince the voters that his new-forged DOYK Party represents change – and is using the "environment" to demonstrate that change has occurred, at the coal face, voters are not convinced that his brand of change will make any difference to the way their nation is governed.

Of course, the Boy King could use the "environment" to demonstrate that the UK needs an independent policy, and is no longer going to be slave to the dirigiste rule of Brussels. But, since he has bought into the Brussels-favoured myths on global warming, he has bought into the project anyway, and is simply messing around at the edges.

However, we would be deluding ourselves if we thought that the Boy King could salvage his experiment by taking a robust view on EU legislation. But the very fact that he has avoided taking on this issue at all is something of a touchstone. That he cannot cope with Brussels means also that he is incapable of addressing in any form the growing power of the apparatchik, which also means that he and his DOYK Party is a waste of space.

Given the results of the current round of polls – which we fully expect to see replicated – we now believe that the Boy King has dragged his Party into an irrecoverable position. There is no direction he can go but down.