Why does the BBC give this prominence? 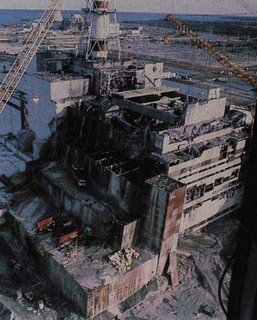 The headline on the BBC website is a model of the Corporation’s objectivity: Greenpeace rejects Chernobyl toll. A little out of date, I thought to myself, but they get there in the end.

In fact, the real story was last October when the UN-led Chernobyl Forum came up with considerably lower figures of probable deaths as a result of Chernobyl. The report said between 4,000 and 9,000 (quite a large difference) and explained that there had been difficulties in calculating casualties.

“In the report, the World Health Organization dramatically lowered the estimated Chernobyl death toll, suggesting confusion had been caused over the accident's impact.

Many emergency and recovery workers, the report suggested, had died since 1986 from natural causes which could not be attributed to radiation exposure.”

Up with this Greeenpeace will not put. Having, so far as anyone can work out, done next to no research on the subject, it has, nevertheless produced a report that gave as its considered estimate that

“… there will be 270,000 cases of cancer alone attributable to Chernobyl fallout, and that 93,000 of these will probably be fatal.”

And the BBC solemnly reported this, interviewing Blake Lee-Harwood, campaigns director at Greenpeace, who explained on the Today programme:

Maybe and maybe not. As Greenpeace campaigner Jan van de Putte told Reuter’s (another organization that seems to think this is worth reporting):

“Our problem is that there is no accepted methodology to calculate the numbers of people who might have died from such diseases.”

So you can make up any figure you like, in the certain knowledge that the word nuclear will send shivers down the spine of certain parts of the media. Here are the comparative figures as presented by the UN and Greenpeace reports: The discrepancy seems so great as to be laughable. Let us remember that neither the UN nor the WHO are known for underplaying disasters or numbers of deaths caused by human agency. In fact the original report had suggested a probable death toll of 600,000 but for some years there was a tendency in the region to attribute everything to Chernobyl.

One possible explanation for the discrepancy is given by WHO spokesman, Gregory Hartl:

If they really are looking at all of Europe, calculations of what may or may not have been caused by Chernobyl become even more random.

Reports of effects, twenty years on, of the biggest nuclear catastrophe in the world have varied, some citing immunological weakness in those who were in the area as babies and children, others pointing to the remarkable lusciousness of what has in effect become a natural resort around what was Chernobyl. Both positive and negative reports need to be read with an understanding of the effect on people and nature other Soviet and immediate post-Soviet policies may have had.

Mr Lee-Hartwood alleges dark plottings on the part of the nuclear industry, which was, according to him, severely embarrassed by Chernobyl. That, of course, is as untrue as the rest of the Greenpeace spiel. WHO is unlikely to be in hock to the nuclear industry – quite the opposite, in fact. And said industry was not nearly so embarrassed as the left was, who had excoriated nuclear energy but only in the West, assuming that the benign Soviet government would ultimately look after its people.

Chernobyl showed up the political corruption and sheer mind-boggling inefficiency of the Soviet system. That is why it was the biggest nuclear disaster in history. (Though the suppressed Urals one may well run a close second.) But Greenpeace is not about to admit such inconvenient truths. The question is why anyone should take their blathering seriously.