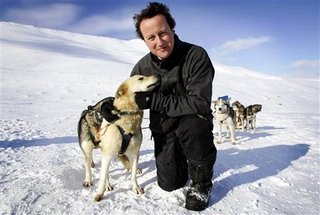 In one positive development in an otherwise bleak landscape, Booker has been pulled out of semi-obscurity in the inside back page of the Sunday Telegraph, where we was consigned by the erstwhile, unlamented editor Sarah Sands. He has been returned to his former glory by the new editor, Patience Wheatcroft, in what we hope will now be the start of the paper's reversion to a proper newspaper.

In his column, Booker charts the damage John Prescott has done to British democracy, and also points up Defra's latest gaffe – a hilarious reporting error.

He then takes up our evaluation of the Boy King's cosmetic environmentalism, remarking on the "blights on the British landscape" that our new "green" Tories opt to remain silent about.

His obsession with the "environment", writes Booker, seems to be limited to no more than puerile and futile gestures. Nothing better exemplified this, he adds, than his statement last week on the recent epidemic of fly tipping, which has soared by 43 per cent, including dramatic rises in the dumping of vehicles, builders' rubble, asbestos and electrical goods.

Instead of honestly explaining that this has been caused by a swathe of EC directives which make it much more difficult and expensive to dispose legally of rubbish, all the Tory leader can offer is a pledge to spend even more taxpayers' money on hiring even more officials to track down and prosecute the offenders.

Booker concludes with the question, "How green can you get?" 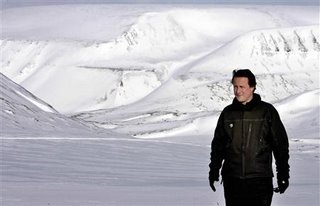 Although we have done the Boy King to death of late (unfortunately, only metaphorically), before leaving him alone in the obscurity he truly deserves, we cannot help but note the story in The Times yesterday, which reported the Boy in trouble over his choice of car.

No sooner was he back from Norway in his gas-guzzling private jet, having communed with his melting glacier, than the Greens were protesting that he had failed to pick the most environmentally-friendly option for his next chauffeur-driven car - to be provided at the taxpayers' expense, on top of the Boy's £125,000 salary.

The Greens wanted him to take a petrol-electric hybrid Toyota Prius but, instead, the Boy opted for a Lexus GS 450h. Currently retailing at between £31,000 and £48,000, it is advertised by its maker as having a "combination of power and luxury that's truly electrifying" and "uncompromising luxury".

Actually, the emissions are lower than some of the other choices he could have made, but who the hell cares? Once you start up on a mindless "greener than thou" crusade, every action you take – from how much water you put in your kettle to the detail of your travel arrangements – is going to be under intense scrutiny, inviting scope for endless ribaldry whenever there is a lapse. The Boy is going to regret he ever opened this can of worms.

However, that has not stopped him prattling away in a vacuous opinion piece in the Sunday Telegraph, the centrepiece of which is his "radical agenda for greener cars" which he is to announce tomorrow.

The Boy wants – or so he tells us – "Britain to be at the forefront of international efforts to build a new generation of motor vehicles that are much less environmentally damaging." Such a programme, he adds, "will include significant incentives to encourage the ownership of newer, greener vehicles."

Unsurprisingly, these "international efforts" are remarkably similar to those set out by the EU last year, which rather proves ours and Booker's point. The Boy has simply bought into the EU "green agenda" and, what is worse, he is now trying to pass it off as an expression of "traditional Conservative values".