The Boy King does it again 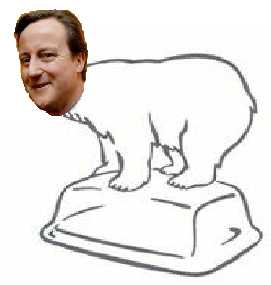 As he flies off in his ozone-guzzling jet to commune with glaciers in Norway, the Boy King leaves behind him instructions for the plebs on why they should "vote blue" to turn green – all with a distinctly local tinge.

Bemoans the Boy, there are more abandoned and burnt-out cars, with the number of burnt-out cars having soared by a third, from 35,162 across England in 1997 to 46,660 in 2004. Equally, there is more fly-tipping. Since 2001, the Environment Agency has had to deal with an increase of 43 percent. Last year they dealt with some 5,399 cases in total. The illegal dumping of waste during 2002 accounted for 14 percent of all the serious pollution incidents dealt with by the Agency.

Now, it just so happens that much of these ills can be put directly at the door of the EU's ill-considered Landfill Directive, and related environmental legislation. This, we have observed on this Blog, such as here, here and here. Furthermore, the infrastructure costs, alone, of implementing the directive amount to £10 billion, all of which must come from Council Tax.

But, as we know, the Boy King doesn't "do" Europe. So, instead of tackling the problem at source, what do we get from the Boy?

Well, the modern, compassionate Conservatives answer is curiously old-fashioned – and un-Conservative. In page after page of gushing prose, he tells us how conservative councils are going to throw even more public money and employ even more public officials at the problem.

"We have to think globally and act locally," chirps the Boy. Moi? I'd settle for a little bit of thinking. But then, the Boy doesn't "do" that either.