One small step for the EU… 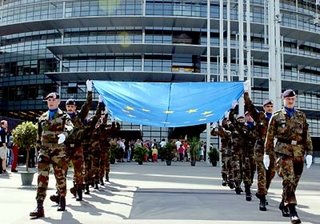 If there was ever any doubt that most journalists rely excessively on press releases when they report on EU affairs, it should be dispelled by the treatment of yesterday’s announcement by the commission on the "defence equipment market".

The press release itself declares that the commission has opened consultation on "creating a single market for EU defence industry", arguing that the circulation of defence-related products in the internal market is restricted by varying national administrative procedures in the Member-States.

From this, we can take it that the beneficent commission wants to reduce these obstacles to intra-community trade in defence products, in order "to make European defence industries economically more efficient and technologically more competitive." This will enable member states, it says, to meet military needs under proper security conditions and at lower cost.

We then get commission vice-president Günter Verheugen, who is responsible for enterprise and industry policy, saying: "Opening the internal market for defence products would boost our economy and increase the competitiveness the European defence-producing companies."

This was picked up by EU politix, with the headline: "EU to speed up defence market liberalisation", reporting that "Brussels has taken a new step towards opening up EU defence markets by announcing a public consultation aimed at defining a European approach to the armament industry."

Euractiv does a similar job, with "Commission seeks opening of defence market" and the Financial Times offers "Brussels moves to cut barriers to arms trade".

Of the MSM, however, only The Telegraph seems at all interested in the story – which makes a change – but its offering takes the headline "EC seeks power to regulate arms sales".

Correspondent David Rennie then tells us that the EU commission has suggested that it should be given sweeping powers to regulate arms sales within the European Union as well as exports of arms outside the bloc. He also tells us that “the proposal was greeted with shock by EU diplomats as it would strip control of European arms sales from national governments.”

Rennie then elaborates on the story on his own blog. He writes:

At the risk of special pleading, there are a few reasons why reporting European Union news can be rather hard. One of them struck home as I wrote up a report for today's print edition about a European Commission power-grab for control of exports and intra-EU sales in the defence sector.

The problem is this. In general, when pitching a story to editors in London about some new plan or project, you are expected to say whether it has a good chance of ever coming to fruition. It's a not unreasonable question. Some new plan can be as dramatic as it likes, but in the real world, the fact that it is doomed, and will never happen, does diminish its importance. …

This single market in defence looks like just such a plan. Technically speaking, it is not even a plan at all, but the mildest sort of suggestion, being floated under the noses of member states by the Commission, in the form of a consultation paper.

It all came as a total surprise to the diplomats I spoke to yesterday - "this is out of a clear blue sky", in the words of one of them.

However, why it should have come as a surprise to these "diplomats" - or Rennie for that matter – is entirely a mystery. This latest move is simply a continuation of a long process where the commission has been seeking, largely successfully, to whittle away the Article 296 "national security" exemption on arms production, with the aim of encouraging the creation of a European arms industry.

It is also entirely in keeping with UK policy and stems from the 2000 Framework Agreement and the creation of the European Defence Agency.

And, had Rennie actually read the consultation paper, he would have noted the core rationale offered by the commission. "Achieving the objectives of the European Union’s European Security and Defence Policy (ESDP)", it says:

…depends, among other things, on the ability of Member States to meet military needs under proper security conditions and at an appropriate cost. This implies giving the defence industry a European dimension, thus increasing the competitiveness of the technological and industrial base of European defence and in particular of European defence companies. This industrial objective requires that the transfer of defence-related products be simplified at Community level.

This is the bit ignored by Rennie and all the other reporters and goes to the heart of the matter – a policy issue which the UK government wholeheartedly endorses. I would not, therefore, be at all sanguine about the enterprise being "doomed".

Nevertheless, Rennie does offer reasons why it should fail, writing:

There is already a grave crisis of confidence between the EU and the United States. Congress, in particular, fears that Europe is so leaky that if you're selling defence secrets to EU clients, you might as well save everyone the effort, and post a second copy straight to Beijing.

"Britain is the second largest defence exporter after the United States, and we probably have the toughest export controls in the world. We need to be deeply suspicious of any moves to Europeanise defence," he said.

He noted the current fight between Britain and the US Congress over the Joint Strike Fighter. US politicians argue that they cannot give us the "source codes" at the heart of the plane's most whizz-bang systems, because we have to share our defence secrets with the French, and the French give all theirs to China.

The US position is a caricature, of course, but Atlanticists like Mr Howarth fear any move by Brussels to make things worse.

The consultation period is to last three months, whence we can, in the fullness of time, expect another statement from the commission. The chances are then that it will not get all that it wants but, as we have seen so many time, it is quite content to take things a small step at a time. When you add up the cumulative effect of all these small steps, the progress has been quite remarkable – and dangerous.

Thus, while the outcome of this current round of consultation could only be one small step for the EU, it might also represent a giant leap for defence integration.