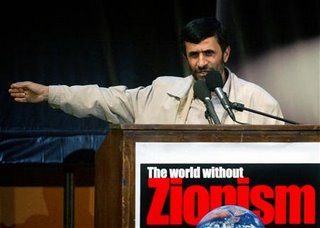 As readers of this blog know, we believe in freedom of speech and have argued that even such an unattractive specimen of humanity as David Irving should be allowed to tell his lies unmolested by the law. As should Professor Eric Hobsbawm. Oh woops, he is allowed and is highly regarded for them.

We also think that both Germany and Austria have now gained their spurs as democratic countries and, therefore, denial of the Holocaust should not only not be made a crime in other countries but should actually be decriminalized in these as well.

Still, that is up to the Germans and the Austrians. One would, however, like to see some consistency in the matter. Who is the most prominent Holocaust denier at the moment? Step forward Iranian President Mahmoud Ahmadinejad. And who, according to the German media, will be a very welcome official guest during the forthcoming Football World Cup in Germany? Errm, Iranian President Mahmoud Ahmadinejad.

Of course, he cannot be tried for statements not made in Germany but one might expect the German authorities not to fall over themselves welcoming this rather repulsive specimen of humanity, who has, among many other achievement, ordered the public hanging of two teenage boys for alleged homosexual activity.