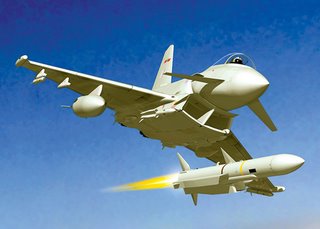 The UK may be about to lose the remaining vestiges of control over another huge tranche of its defence industry, leaving us even more reliant on European companies.

That will be the outcome if, as The Business reports today, BAE Systems is about to sell its €1.5 billion share in European missile company, MBDA.

Following out on the heels of the planned sale of its 20 percent Airbus stake , this will mark a further retreat from Europe, as BAE Systems seeks to reinvent itself as an American company, primarily serving the US defence market.

Currently MBDA is jointly owned by EADS and BAE Systems, each holding a 37.5 percent share, with the Italian aerospace company Finmeccanica holding the remaining 25 percent. EADS is expected to buy up the BAE Systems shares and it is also believed to be interested in buying up Finmeccanica's 25 percent.

Crucially for the UK, MBDA supplies vital weapons systems to the UK, including the Meteor air-to-air missiles which will equip the Eurofighter (pictured above), the SCALP ED/Storm Shadow air-launched cruise missile, the Brimstone "fire and forget" anti-tank missile and the Aster missiles that will equip the Type 45 Destroyers.

Although BAE Systems had little control over the design of these missiles (one of the reasons why it is losing interest in working in multi-national conglomerates) and the UK less so – with the design authority of key components vested in German and French companies – the withdrawal of British share ownership would place total control in the hands of European-owned firms, with much of the manufacturing carried out offshore.

Following on from my publication, The Wrong Side of the Hill, we now seem to be moving to the end game where the MoD, and thus the UK, is totally reliant on European suppliers for the bulk of its high-tech weaponry and thus, inevitably, hostages to the Europeans, should we ever wish to use them.