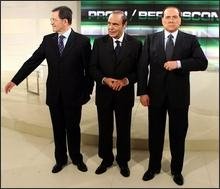 What a lot of things will be happening on April 9. Palm Sunday, of course, and the anniversary of the toppling of that statue in Baghdad. Then there is the Italian election, after a campaign conducted with an astonishing amount of mud slinging and histrionics.

So what else is new? Well, the state of the Italian economy, for one. As Christopher Fildes writes in today’s Evening Standard (not on line)

“The question for the next government, whoever forms it, is whether Italy will struggle to keep up with the euro, or quit, or be forced out. If it had to start again, Italy’s national debt – more than its total output of goods and services – would burst the rules wide open.

They have now been elasticised to fit the candidates, but Italy’s economy is going nowhere. It lags behind France and Germany. Last year it hardly grew at all. In the past 10 years, its share of world trade has almost halved.”

Being part of the euro does not help but, despite Prime Minister Berlusconi’s outburst against “Prodi’s euro” the fault lies within Italy itself. The single currency was never going to solve all these different countries’ economic problems; but the notion of a “European reform” that would somehow do that is equally fatuous.

Lorenzo Codogno at Bank of America

“prescribes a massive dose of reform: privatisation, deregulation, cutting the size of the state”.

Very little of it can be achieved while Italy stays in the euro or, for that matter, the EU but if it is to be done it has to be done by an Italian government. Neither of the main candidates seems anxious to deal with the problem.

In the meantime, we get news that

“The secretary general of Italy's largest Muslim organisation, the Union of Islamic Communities in Italy (UCOII), has called on Italian Muslims to vote for the Party of Italian Communists at the general election.”

It would seem that UCOI has already taken on Communist nomenclatura. This is the first time I have heard of a secretary general of a Muslim organization.

“the party's leader Oliviero Diliberto had been sensitive to the needs of Muslim inmates when he was justice minister in the late 1990s and this constituted a sound reason to vote for him on 9-10 April. This was the first time that a leading member of Italy's Muslim community publicly supported a party on the eve of an election.”

Hmm. That’s as may be. But one cannot help wondering whether fresh questions ought not to be asked about the organization of those massive anti-war and anti-American demonstrations.