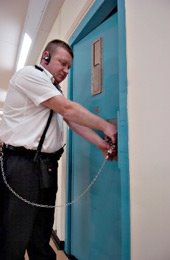 I think that, if I was the Brussels correspondent for any UK media outlet, I'd be thinking about looking for a new job - so lacklustre is the agenda over the water, compared with the British political scene that is just beginning to get interesting.

The Times, however, is trying its best. Of late, it has beaten the BBC by a full day to the EU parliament story and, as far as I can see, it is the only major newspaper to have run the story about the EU demanding prison sentences for counterfeiting - the practice of copying branded goods and passing them off as the real thing.

Even then, the story has been floating around for a few days, having been flagged up by the Financial Times and Reuters on Tuesday.

But, at least, The Times ran it yesterday, telling us that Brussels had "announced the first EU-wide criminal sanction ... requiring every member country to imprison organised counterfeiters for four years and fine them up to €300,000 (£209,000)."

Having a least reported the story, though, it is a pity the paper then got the details almost completely wrong, demonstrating once again the slender grip the MSM really have when it comes to reporting EU matters.

By "Brussels", of course, The Times means the EU commission and, as our readers know, the commission is not in a position to "require" members to pass laws. Strictly, and in effect, this is a proposal, which must be approved by the member states through the Council of Ministers – and also by the EU parliament.

The substantive issue, though, relates to an EU Court of Justice ruling last September, which we reported on in detail and about which The Times made a great fuss, then also getting it wrong.

The greater error, though, is to claim that this is the first time a criminal law has been so introduced. That is emphatically not the case. Most of the EU law imposed on us comes under the criminal code and the Treaties require that criminal sanctions be imposed. By this means, throughout our membership, thousands of new criminal offences have been created, over which Parliament has had no control.

What is different, therefore, is that the commission is explicitly proposing that the member states impose a custodial sentence, setting the level of at least four years - instead of leaving it to member states to decide which penalty to apply.

That does not mean, though – as The Times implies – that this is a minimum sentence. Four years has to be the minimum maximum, if you get my drift. The actual sentences in particular cases will still be decided by the national courts. The intended effect of the proposal is harmonisation - simply to make sure that the member states standardise their penalties, to prevent criminal from taking advantage of lower penalties in different member states in what is very often a cross-border crime.

What makes the whole thing puzzling, though, is that the commission introduced exactly this proposal on 12 July last – the story is over nine months old.

I guess it has been relaunched following the September ECJ judgement because the legal position then was a little uncertain. And, while The Times – and others – got excited about the idea of the EU setting criminal penalties, it has always been the case, since we joined, that if you contravened EU law, you could go to jail.