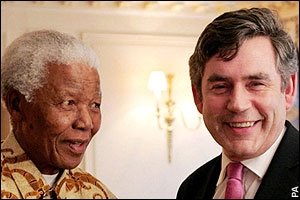 There is a fair crop of letters in today's Telegraph, taking little Gordie to task over his grandstanding on Africa.

"Is there a better indicator of what Gordon Brown sees as value for money than our having to pay £8.5 billion for a photo call with Nelson Mandela?", James Sproule of London SW1 asks, a photograph that must go down as one of the most expensive in history.

How much more effective, cheaper and humane it would have been if Brown and his fellow travellers had focused on vital issues like addressing the problem of malaria, which other bloggers have also highlighted, to say nothing of dealing with the growing burden of EU red-tape which is costing the African economies twice what the EU ploughs back in aid. 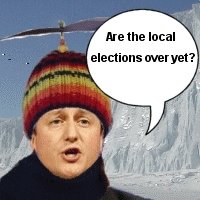 How much more useful it would have been if the Boy King's acolytes had focused on this issue at Manchester over the weekend instead of prating about overfilled kettles and how much better the Boy King might have looked if he had talked about these issues from the platform, giving his obsession with cosmetic environmentalism a rest.

But all of that would presuppose we have adult, honest and well-briefed politicians, instead of the babies-in-office that we are dealing with, chasing after shadows, while wasting our time and money.

Bad government, we can deal with, but that and an inept opposition is something which even the most hardy spirits find daunting. The tragedy is, though, that the combination is not only destructive to our nation, it is killing the people of Africa. But never mind… I am sure the Boy King will enjoy his holiday in Norway - at the taxpayer's expense.