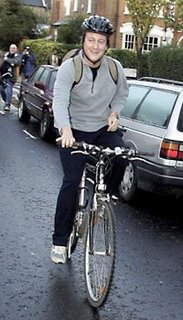 Yesterday, the "cleaner, greener" Boy King was in Bury, near Manchester, campaigning for the local elections next week.

While he was there, he took the opportunity to extol the virtues of public transport, telling us that, "Transport is an issue that affects us all - whether it's getting our children to school, trying to get to work, or simply getting around during the day," adding that "I want us to help people who live in our cities get around quickly and easily.”

While the Tory Toff was quite happy to be photographed alongside such plebeian transport, however, he had far grander ideas about how to "get around quickly and easily." According to BBC's Newsnight, he had flown up from London for the photo-call in a somewhat less than "cleaner and greener" helicopter.

Also, according to the same source, the Daily Mirror reports today that while the "cleaner greener" Boy King makes a very public show of cycling to the House of Commons from his home in Notting Hill each morning, his chauffeur-driven car follows behind with all his papers, his shoes and a clean shirt.

As one of our readers remarks, "He's totally bogus."