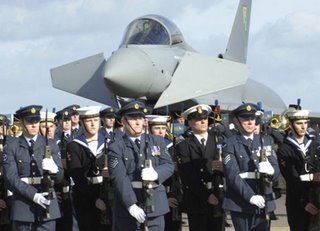 It seems that all you have to do is put a "defence correspondent" into the cockpit and give him a white-knuckle ride and he'll deliver a gushing, rave review of your latest toy.

That much is evident from the piece by Thomas Harding in The Telegraph today, to mark the introduction of the Eurofighter into squadron service.

Thus Harding starts, "To say that the RAF's new fighter accelerates faster than a Formula 1 car is to sell it very short indeed." Gushing onwards, he writes, "For the first 700ft of take-off, the comparison seems apt, but then 40,000lb of rear thrust put the aircraft into a vertical ascent that feels like being in the Space Shuttle and we soar from Earth to 12,000ft in four seconds flat."

At least the leader is a bit more sanguine, a critical piece headed "Fighter plain foolish".

"At least the wretched thing can get off the ground," it intones, "Six billion pounds over budget, and more than a decade late, the Eurofighter, or Typhoon, is finally operational."

It notes also that the MoD is mounting a propaganda offensive in favour of what is "surely the most expensive and least justified defence procurement decision in British history," recording that the MoD found itself caught in the age-old trap of the spending department: having already sunk gargantuan sums into the project, it could not bear to cancel it, and so had to keep signing the cheques. It continues:

The Typhoon was designed in the 1980s to defend West Germany against a massed attack by Soviet MiGs. A modern aircraft would have low technology requirements for spare parts, the capacity to operate from rough local airfields, long loiter-time and buddy refuelling. The Eurofighter has none of these things.

But rather than go back to first principles, designers kept trying to adapt an essentially unsuitable prototype, at one stage removing a cannon only to find that they had upset the aircraft's aerodynamics, and so having to substitute concrete.

Being a child of its time, the plane was to be built by a European consortium... Bear this sorry episode in mind the next time you hear it claimed that pan-European defence procurement will create economies of scale. And while the fingerprints of several defence ministers are on the murder weapon, it is appropriate that the guiltiest of them all should be the supreme apostle of the European grand projet, Michael Heseltine.

But, at a time when we have no new aircraft carriers, when regiments are being disbanded, when we are short of missiles, military computers, drones and satellites, the Typhoon is a disgraceful misallocation of resources.

For the Telegraph, this is a remarkably cogent analysis, and to get the true flavour of the MoD "spin" all you have to do is read the press release.

Coinciding with the RAF's 88th birthday, it styles the formation of the first operational squadron as a "birthday present" – for the RAF maybe, but not the taxpayer. But what price this claim?

This marks a key milestone in the transition of the Royal Air Force to a more agile, capable, flexible and adaptable expeditionary force, better equipped to meet the demands that are likely to be placed on it in the future.

The release then goes on to add:

This restructuring is essential and will ensure we continue to deliver a highly capable, cost-efficient and powerful Air Force, capable of making a winning contribution both on operations and in humanitarian and relief operations.

As the Telegraph remarks, this is a fast jet designed for the Cold War. It can only operate from fixed airfields, with a massive infrastructure and complex engineering support, with a huge logistic "tail". The last thing it is – or can be – is a weapon suited to expeditionary warfare. And one really does wonder how the Eurofighter will help in "humanitarian and relief operations".

At least the Telegraph leader did not fall for the "spin" but the worrying thing is that the MoD might actually believe the guff it has written. If that is the case, it's more than worrying – it's scary.