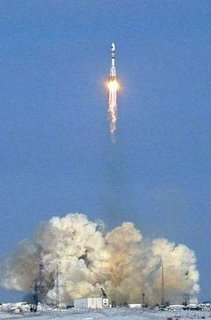 Hubris seems to be something of a speciality in the European Union, not least in the child-like glee expressed at the launch of the Airbus A380 "superjumbo".

But it has also been evident in abundance over the EU's Galileo satellite navigation project, matched in equal measure by triumphalism which was very much to the fore at the launch of the test satellite last December.

But even then there were rumours of cash shortages and overspends, which came to the fore in the New Year, only to disappear under the welter of laudatory press reports which crowed about how the "Europeans" had put one over the war-mongering Americans and their "military" GPS.

Now, however, courtesy of the Financial Times, the tales of woe are re-emerging, with unnamed "experts" claiming that the EU could be forced to cut back on the number of satellites because of "financial constraints".

Although the €3.5 billion programme originally planned to deploy 30 satellites – including three back-ups – with a timetable of 2008 for full operation, delays have occurred through difficulties in securing funding. Even now, the financing has been secured only for the first validation phase, involving about four or five satellites.

Now, Philippe Busquin, a former European research commissioner who now oversees Galileo as a member of the European Parliament, is saying that the programme could manage on 24 or 25 satellites, in order to ease budget problems.

However, for a system that claims to be so much better than the US "Navstar" GPS, that shortfall could undermine the quality of the system. Fewer satellites would reduce the coverage and precision of the system, leading one despairing expert to remark that: "Europe wants Galileo to become the post-GPS generation, not a sub-optimal system."

Perversely, the main problem lies in the EU budget agreement last December which, although more generous than we wanted it to be, was not enough to fund the commission’s ambitions for its transport portfolio – from which Galileo is funded. And other potential beneficiaries are fighting their corners, resisting moves to transfer funds to the EU flagship.

All this leaves the fate of the Galileo project very much in the air or – to be more accurate – firmly on the ground, unless the "colleagues" can be persuaded to stump up with some more money. In the meantime, all those projects which were to use Galileo – including the German motorway toll system - will now have to continue relying on, er… the US Navstar system.

It is no wonder the Americans are so unpopular – not only are their satellites up and flying, and working well, they are also supplying the system to the Europeans entirely free of charge. How inconsiderate is that?