Why not money for peerages? 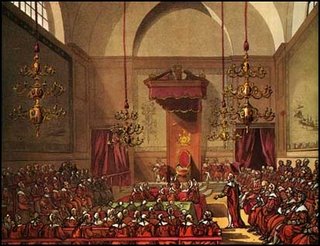 Yesterday I was reminded that behind the ongoing scandals of (in ascending order) Prescott’s excruciating behaviour with his female underlings, Patricia Hewitless’s floundering in the morass of the NHS and, by far the worst, Charles Clarke’s inability to work out where various rather unpleasant villains who should have been deported might be or why that should matter, there is still the outstanding and ever more entertaining saga of loans for peerages.

I must confess, I paid little attention to that, as the notion of paying in one form or another for titles, knighthoods, baronetcies and other suchlike baubles, is hardly new. The only thing that surprised me was the word “loans”? Goodness me, I thought, Lloyd George wouldn’t have put up with that, nor would numerous Victorian politicians, Hanoverian princelings and politicians or, for that matter, the Stuarts or the Tudors.

It was money on the table (and not necessarily for the party) or no handle to the name. Think of James VI of Scotland and I of England establishing a completely new title, the baronet, having already extracted large sums of money for peerages, and asking for £1,500 for each. That was some money in those days.

Or think of the “beerages” of Victorian England. (It is best not to enquire too closely into the origins of most of our ducal families or into the cash and politics of the eighteenth century.)

Then there is Lloyd George. The Marconi scandal of 1912 may have degenerated into a nasty anti-semitic campaign on the part of the Chesterton brothers but a parliamentary committee found that Rufus Isaacs, the Attorney-General and Lloyd George had both benefited from insider dealing in the Marconi company. The same committee decided that there was no evidence of corruption. Rufus Isaacs became a Baron in 1914, rising subsequently in the ranks of the peerage. This could have been a reward for his undoubtedly loyal service to the government as a lawyer or it could have been for other reasons.

In the end it was Lloyd George overreaching himself in the Maundy Gregory scandal that brought about the legislation, which specifically forbade the selling of titles for cash to the party. Until 1925 it was a legal and acceptable form of fund-raising. Hence, presumably, the need to take out loans.

The point is that the reward of a title for help to the party, whether financial or organizational, has never been considered wrong. It has become a scandal partly because Blair’s government is seen as sleaze-ridden and partly because our journalists make up by lip-pursing for their reluctance to pursue bigger news.

After all, we have parties and we do not want them financed by the state. So, the money must come from individuals and what precisely is wrong with those individuals getting some sort of a reward in the fullness of time? Why should gongs and titles go to people because they do their jobs well, whether it is dinner ladies getting MBEs (not that I mind) or civil sevants rising through the honours list?

Do we still have honours for something called “services to export”? We certainly did for a long time. What is “sevices to export” but making lots of money by selling goods abroad? Excellent idea, of course, but why does it need a special commendation?

One also has to remember that loans to the Labour Party is only part of the story. There is the saga, still unravelled but eagerly pursued by our wonderful Metropolitan Police Service, fresh from their spectacular achievement of solving 18 per cent of the ever-rising crimes in London, of peerages being offered to those who have contributed to the City Academies.

As Charles Moore pointed out a week ago, this is an excellent scheme, even though it has not produced the miracles expected by those who have no idea just how terrible some of the schools in this country are.

Of course, City Academies are not the whole solution or even half of it. We need a radical reform of the educational system but we are not going to get one. Blair’s much trumpeted reforms never amounted to much and were, in any case, diluted to pander to the nastiness and hatred for ordinary people that most of his backbenchers show.

The Boy-King in his days of Prince-in-Waiting explained quite clearly that he did not think people wanted choice and, really, the best thing they could do is accept that the Conservative leadership knows what’s good for them.

In the circumstances, the concept of private funding going into some schools, is the best we can hope for. I do not find it at all reassuring that these funders “will have no control” over the Academies. That means control will remain completely with the educational bureaucracy that has over the years destroyed a decent(ish) system and continues in its aim to make Britain the least educated country in the world.

So why should these people not be given peerages? They are contributing to a Labour project but then Labour is in power. They are also contributing, possibly successfully, to the community far more than those endless local government officials who are being given all sorts of gongs and titles.

It is not only journalists and those influenced by them who are jumping up and down. It is also MPs. Now, I find it rather touching that rich people are prepared to pay large sums of money either into the political machine or, preferably, into City Academies and ask nothing in return but a title and the membership of the House of Lords. Who knows? Some of them might have turned out to be useful participants in the work of that establishment.

In actual fact, most of Blair’s enormous number of peers have found that being active in the Lords involves a great deal of badly remunerated work. Peers do not get paid and are given expenses only if they turn up in the Chamber. The work they do on Committees is done for free; the preparation they put into speeches is done for free; and any research they need they have to pay for.

How different from our elected legislators who get a sizeable salary, enormous expenses for staff, travel and second home (no wonder they don’t mind pushing up taxes on second homes – they will have theirs paid for by the very same taxpayer), heavily subsidized food and drink in the House, not to mention many lunches, dinners and entertainments by journalists, businessmen, people who need favours. And there is, of course, the tantalizing and usually fulfilled prospect of directorships and seats on boards of quangos.

Ministers have even higher salaries, cars with chauffeurs and, often, grace and favour homes, where they can carry on to their hearts’ content.

Mutatis mutandis, the same is true for local councillors: a high rate of expenses, lots of travel and various jollies and freebies.

Professor Bernard Lewis, the great expert on Islam and the Ottoman Empire, explains in one of his books (I am quoting from memory as I do not have the volume to hand) the difference between corruption in the West and the Middle East.

It exists in both but with some exceptions politicians in the West make their money first and then buy their way into politics; in the Middle East it is the other way round. One becomes a politician in order to make money.

Morally, both are reprehensible, Professor Lewis says, but from the point of view of the body politic, the Western way is preferable in that it makes politics itself less corrupt, less oppressive and more transparent.

It would seem that those who give money in order to receive peerages are in that category, whereas the elected legislators of this country have taken on a more Middle Eastern attitude while managing to retain an astonishing ability to moralize.