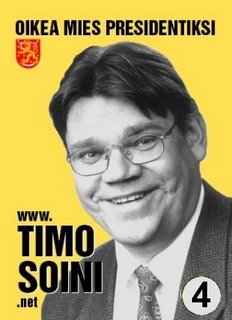 "We need to escape from the heart of darkness in Brussels and stop licking the EU's boots." So says Timo Soini, Finland's most outspoken EU sceptic, and former presidential candidate, leader of the populist rural party named True Finns.

Soini recently considered protesting at plans by his government to ratify the European Union's moribund constitution by drop-kicking it down the stairs of Parliament or immersing the 300-page document in a pile of fish. In the end he decided against any such display, on the grounds that it would be too "un-Finnish".

Such delights are brought to us by today’s International Herald Tribune which records that Soini's campaign against the EU has gained him a growing following. In the presidential elections in January, he surprised the political establishment by winning nearly 3.4 percent of the vote - coming in fifth among eight candidates, including the sitting prime minister and president.

His popularity appears to reflect an intensifying backlash against the EU in Finland, the only Nordic country using the euro. "The days when Finns thought the EU could do no wrong are over," said Alexander Stubb, an MEP and one of Finland's most ardent EU proponents.

This is backed by a poll by the Finnish research institute, Eva, which found that the percentage of Finns favouring the EU fell to 33 percent in January 2005, a drop of 11 points from the previous January. Two-thirds of the respondents said the costs of the EU outweighed its benefits.

Another poll, by Eurobarometer, indicated that 51 percent of Finns had negative feelings about the EU, with the difficulty of understanding what the bloc actually does cited among the greatest problems.

Thus, says the IHT, with Finland poised to take over the presidency in July, such scepticism comes at an awkward time. Finland will have the task of reinvigorating the Union during a period of doubt about its expansion and growing economic nationalism on the Continent. This, it says – with a degree of understatement - could prove difficult.

The paper cites "political observers" who say the increasingly frosty attitude toward the EU in Finland is noteworthy because the geographically isolated country is not part of NATO and has traditionally viewed the EU as a vital link to the West and guarantor of its security. "Finland always wants to be the best pupil in the EU class," said Mikko Majander, a Finnish historian. "But Finns are beginning to ask themselves: Why should we go to such efforts, when big countries can't seem to bother?"

Nevertheless, Soini, believes the EU's further expansion has an attractive side: It will make the bloc so unmanageable that it will self-destruct, he says. "It may be good if the EU gets so big that it can no longer function - it will be like a rat with its hypothalamus removed, who keeps eating until it explodes," he adds.

Railing at the Finnish political establishment, he describes it as "blindly pro-European", hence the government's push to ratify the EU's draft constitution in the parliament, even though two of the EU's founding countries had rejected it. "It is like wanting to display a dead elephant at the zoo," he says.

He compares Finland's relationship with the EU to its appeasement of the Soviet Union during the Cold War. "Everyone knew that the communist dictatorship was a harmful system, yet we talked about it bringing peace and prosperity," he said. "Now we use this same double-speak when talking about the EU."

But, we are told, even the pro-European camp in Finland is starting to lose patience. Heidi Hautala, a pro-European parliamentary leader of the Finnish Green party, says support for the EU in Finland is declining because perceptions of the EU have caught up with the reality after expectations were raised too high.

Hautala, who spent eight years in the EU parliament, says that the EU also has lost Finnish confidence by squandering taxpayers' money and passing bizarre and unnecessary legislation. A committed environmentalist, she says that she is nevertheless bemused by EU proposals calling for observers on EU fishing vessels to monitor the accidental killing of porpoises.

And she says Finns are still reeling over EU proposals a few years ago to ban tar, which has been used for protecting boats and roofs in Finland for centuries.

And so does the Great Empire decline… brought down by a ban on tar – and perhaps lead in organ pipes. It’s often the little things that do for you in the end.