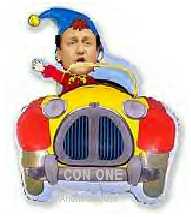 So, Rachel Sylvester thinks – if one may be so bold as to use that word – that the Boy King is "a true-blue Tory". "He is, in fact," opines the fair lady, "the most traditional Tory leader since Alec Douglas-Home."

One really wonders whether the lady fully understands the implications of her comparison, though. Having become leader of the Conservative Party in October 1963, Douglas-Home then went on to lose the general election the following year, after a mere 362 days as prime minister.

The Boy King might, however, take heart from Douglas-Home's most memorable quote. He declared: "There are two problems in my life. The political ones are insoluble and the economic ones are incomprehensible".

Not that the Boy King would ever trouble himself with anything as tedious as real politics or even economics, being more master of the "photo-opportunity" than anything substantial.

It was quite amusing to read in the Spy column, therefore, of how the Boy's communion with glaciers so very nearly came unstuck, and would have done so but for the craven behaviour of a media photographer.

According to Spy, the Boy's contented expression, as he hacked across a Norwegian icefield flanked by huskies, belied a deeper unease. Apparently, during his ride on the sled, one of the husky dogs had to do its business. One of the other dogs trotted over and kicked it up into the air, splattering it all over Boy. He implored the cameraman not to film until he had scrubbed it all off. Unfortunately, the cameraman complied, leaving the event unrecorded for prosperity.

Nevertheless, Spy got a nice punch-line out of it, suggesting that this was more a case of "vote blue, go brown".

Despite this, the Boy continues to live dangerously, yesterday offering himself as a model, test driving Noddy cars on Dunsfold airfield in a bid to further his "green" credentials.

What makes the whole thing a charade is that the Boy's newly-leased £38,000 Lexus saloon - which can manage 155 mph from its 3.5 litre V6 engine - was hidden behind one of the hangars, out of sight of the less than enterprising photographers.

This is enough, it seems, to convince voters that the Boy seems "genuinely to care about the environment more than most politicians". That much comes out of a Populus poll for the BBC television programme The Daily Politics, undertaken on April 19 and 20, cited by Peter Riddell in today’s Times.

This showed that the Boy's credentials were believed by a narrow 47 to 41 percent margin, although Riddell thinks it will take more than huskies and cleaner cars to get voters on-side. By a two-to-one margin (62 to 31 percent) they also think the Boy is probably only talking about the environment "because he thinks it will make people more positive about the Conservative Party, not because he really cares about it".

The question Riddell poses is whether enough voters care about the environment sufficiently to turn the tide. Recent poll evidence would indicate that they do not.

Never mind. Little Rachel tells us that the Boy believes that his role is to take his party back to its moderate, election-winning roots – no doubt using Douglas-Home as a role model. It's a funny thing though… it was the distinctly un-moderate Thatcher who did rather better.