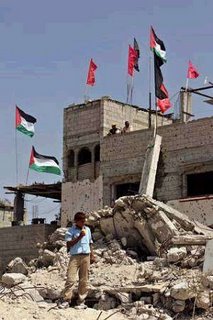 While the journalists and various pundits examine every tea leaf and every coffee granule in between contemplating chickens’ entrails about that elusive concept the Iraqi civil war, a completely different area is gradually sliding from anarchy into full scale war.

According to a report in Friday’s Washington Times

“Militant squatters loyal to rivals Hamas and the Palestinian Authority are turning open lots in the Gaza Strip into ad hoc military bases, a development that some fear will lead to open warfare between rival Palestinian factions.”

Nominally, these military bases and camps are supposed to be training boys from the age of 16 onwards to fight Israel and the “Israeli occupation” (that is all the land between the river Jordan and the Mediterranean). That, in itself is unlikely to create a stable situation, but, in fact, the creation of rivalling militias is likely to exacerbate the existing tensions that involve Hamas, Fatah, Islamic Jihad and various local chieftains.

“"Everyone is showing their strength under the umbrella of the resistance," said Tawfik Abu Khoussa, a former spokesman of the Palestinian Interior Ministry. "If there is a little problem between the factions, maybe they will start a civil war."”

As the various militia leaders point out, Gaza has remained uncontolled and lawless, with no economic life to speak of and the various destroyed (by agreement) Israeli settlements were clearly there to be taken by any armed group that happened to be passing.

“Highlighting the tension between Hamas and Fatah, Palestinian gunmen from Fatah's Al Aqsa Martyrs Brigades militia briefly took over the Palestinian Cabinet building in the West Bank city of Ramallah yesterday. The gunmen were protesting the Hamas government's refusal to meet their demands for perks and new promotions, the Associated Press reported.”

In the meantime, the police in Gaza, many of whom belong to Fatah, staged a violent protest and stormed a government building, demanding to be paid, which they have not been for two weeks.

As the BBC puts it:

“Hamas claims it inherited an administration with more than $1.3bn (£740m) in government debt.”

The Palestinian Finance Minister, Omar Abdel-Razek, blamed the financial crisis on the cessation of direct aid to the Palestinian Authority from the EU, US and Canada. Aid is still going through NGOs for humanitarian and social projects but that does not pay the various gunmen and officials that Mahmoud Abbas had hired just before the election he lost, thus using up all the not incosiderable amount of money he had been given before.

The direct funding has been withheld because Hamas has refused to recognize Israel’s right to existence and to give up terrorist activity. There seems to be some ambivalence about the latter. On the one hand, Said Siam, the Interior Minister has announced that nobody is above the law (though who is to enforce it, remains unclear), on the other hand he has also announced that members of militant groups would not be imprisoned because they were clearly the outcome of the “Israeli occupation” and a response to it.

The trouble with that argument is, as Mr Siam is beginning to find out, that once you have armed militant groups who know that nothing will happen to them, they are unlikely to submit to any kind of control.

Then, of course, there is the problem of those continuous rocket attacks into Israel, one (unusually, a Katyusha) fired during the Israeli elections. These are fired by Islamic Jihad and the Hamas-led Palestinian Authority has promised to control them, though has done nothing about it.

Through it all runs the same theme: Hamas will not negotiate with Israel because they do not recognize that country’s right to existence. It is not a question of the pre-1967 borders but the whole territory that had been set up by the United Nations in 1948 (and attacked immediately by the neighbours).

A curious, self-defeating double argument has been advanced by various people and organizations as to why Western countries should continue to give aid to the Palestinian Authority. It is, after all, the chorus of voices, led by Hamas itself, maintains the democratic choice of the Palestinian people.

On the other hand, many of the same people say, the Palestinian people should not be punished for the fact that Hamas is not behaving particularly well.

This, as we have pointed out before, is an infantilization of the Palestinian people. They did, indeed, choose democratically Hamas. One could argue that in the circumstances they have lived, circumstances created largely by the late unlamented Chairman Arafat and his cohorts as well as various other Arab countries, it was difficult for them to act in a mature political way.
They did, however, choose Hamas and there are certain consequences to that. One is that the direct payment of moneys to the PA has dried up.

Needless to say, a delegation of MEPs has already proclaimed tearfully that not handing over large amounts of dosh to the Palestinian Authority and its various militant branches “risks turning the crisis into a catastrophe”.

One cannot help feeling that these parliamentarians are a tad naïve:

“"Hamas representatives told us clearly that they are prepared to recognize 1967 borders and the PLO as legitimate Representative of Palestinian People, which implies recognition of Israel," said Luisa Morgantini as Chair of the MEPs delegation, in a statement.

"They have respected the cease-fire for more than 18 months and they are ready to continue, which amounts to non-violence, they also say enough of bloodshed."

"In the same time they ask for reciprocity; Israel has to do the same. Our diplomacy can bridge the gap."”

It is hard to know what sort of reciprocity is being discussed here. The Israelis have said that terrorist attacks will be treated as such and will be punished. That seems like reciprocity but, one assumes, that is not what Luisa Morgantini meant.

Furthermore, implying “recognition of Israel” is not quite the same as saying it. So far, every pronouncement on the subject by Hamas officials has either denied it or skirted the issue.

Danny Rubinstein in Ha’aretz sums up:

“The Hamas leadership is in a panic. Just two weeks have elapsed since the government headed by Ismail Haniyeh was sworn in and it appears helpless. The immediate problem is paying last month's salaries. The coffers are empty, and the previous government left debts estimated at $1.25 billion.

Embittered cops rampaged yesterday through the streets of Khan Yunis, commandeered parliament offices and blocked traffic. The policemen, like all 150,000 Palestinian Authority workers, demanded to be paid.

The problem is that American and European aid has stopped, while Israel is withholding tax receipts collected for the PA. Following American and European warnings, Arab and foreign banks are hesitant about extending PA credit. "The Arabs owe us $200 million they promised and didn't pay," said Foreign Minister Mahmoud Zahar before leaving on a rescue mission to Arab countries.

As one commentator put it in a television interview with a Persian Gulf channel, "We have returned to being a public of needy refugees and beggars like we were in 1948."”

The economic situation is not helped by there being no serious economic activity in either Gaza or the West Bank. Before the second intifada, launched by the late unlamented Chairman Arafat in 2000, many Palestinians were employed in Israel. That ceased to be a possibility.

Taking over existing assets in the Gaza proved to be impossible, despite the generosity of various Western organizations. According to a report on WorldNetDaily, brought to the blogosphere by Little Green Footballs, it was the Bill and Melinda Gates charity foundation that was responsible for much of the money that made it possible for the famous greenhouses of Gush Katif to be handed over to the Palestinians in full working order.

“The hothouses, worth several hundred million dollars, were passed to the Palestinians in September in a $14 million deal brokered by former World Bank President James Wolfenson. According to reports, Wolfenson personally contributed $500,000 of his own money and the rest was ponied up mostly by American Jews, including billionaires Mortimer Zuckerman and Leonard Stern.

But an article in Forbes Magazine stated the $29 billion Bill & Melinda Gates Foundation, the world's biggest charity, provided most of the money – $10 million – to purchase the greenhouses.

The magazine pointed out the donation falls outside the main focus of the foundation: global health. Gates is not known to involve himself in Mideast diplomacy or charities associated with Israel or the Palestinian territories.”

“But Gates may not have got his money's worth. According to reports, the geenhouses were looted by gunmen following Israel's withdrawal. Computer equipment and, in some cases, entire greenhouses were stolen. The theft has put out of action about 70 acres of the roughly 1,000 acres left by the Jewish communities, according to [Ahmed] Al-Masri [current manager of the Gaza greenhouses].

Another round of looting struck the greenhouses in February when Fatah gunmen hired to protect the greenhouses abandoned their posts because they had not been paid. Witnesses reported some of the security guards themselves participated in the looting.

Mr al-Masri then insisted that everything had been recovered and the greenhouses were functioning at full capacity. As WND put it wryly, there had been no possibility of independent verification of the claim.

Mahmoud Abbas’s associates predict that the Hamas government will fall within weeks but by then Gaza, at least, might be in a full-scale civil war.

There are, of course, other sources of finances. As Ha’aretz puts it:

“Hamas leaders have resorted to a new tack: threatening Arab regimes and tightening bonds with Iran. Haniyeh announced that if the U.S. and Europe persisted in the economic siege, their interests in the Arab and Muslim world would be harmed. In other words, Haniyeh is trying to enlist sympathetic masses in Arab and Muslim countries against the West, and indirectly also against the Arab regimes.”

Hamas leaders did, indeed, have a meeting with Iranian President Ahmadinejad, Supreme Leader Ayatollah Ali Kahmanei during which the President proclaimed that the Zionist regime, which was a permanent threat to Islam, was “heading for annihilation”.

Since then Iran has announced that it will donate $50 million (£28 million) to the Palestinian Authority to make up for the deficit left by the withdrawal of Western funds.

This is unlikely to be enough, though the actual extent of the debt seems to alter from interview to interview

“Mr [Khaled] Meshaal [top Hamas official], at a fundraising event in the Iranian capital, Tehran, said the Palestinian administration was $1.7bn in debt.

He said a further $170m a month was needed to run the administration, out of which $115m went to paying salaries.”

Russia, too, has said that money for the Hamas-led PA will be forthcoming but, so far, the Foreign Minister Sergei Lavrov has not made it clear how much that will consist of and what the conditions will be. Russia has already stated that Hamas should recognize Israel.