Abstinence is the only option 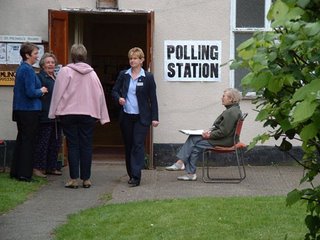 A robust discussion is developing on our forum on the merits or otherwise of not voting at Thursday's council elections.

Adding fuel to the debate is this morning's leader in The Daily Telegraph. It suggests, in the context of the various crisis affecting the government that, "Labour's shenanigans damage all the parties", arguing that the party’s response reinforces voters' perception that Labour ministers are out of touch, in it for themselves, corrupted by office.

The remedy, we are reminded, is in the polls on Thursday, when a number of us will be voting. "So will we use our ballots to punish this tired, smug regime?" asks The Telegraph. "Up to a point," is its answer. "It is true that Labour is falling in the opinion polls; but the party is, to some extent, dragging the entire political class with it."

Thus, it opines, most voters do not mutter, "bloody Labour", but "bloody politicians". A "fascinating YouGov survey" in The Telegraph asked voters which party they would like to have running their council. No party attracted even one voter in five.

The point, of course, is re-made by the paper, which reminds us – as indeed we have done – that local elections determine next to nothing, because councillors have lost power to Whitehall and to local quangos. It is a pity though, that the paper did not also add "Brussels" which determines major (in cost terms) policy issues like waste disposal.

However, the paper's conclusion is sound. "Logically enough," it says, "voters treat the poll as a way to register their contempt for all the mainstream parties, either by voting for a fringe organisation such as the BNP or the Lib Dems or - more usually - by staying at home. We can't really blame them; but it says nothing good about the state of Britain."

In terms of staying at home, the Telegraph thus provides the rationale. By doing so – in the context that going out to vote does not and cannot change anything – we say "nothing good about the state of Britain". That, in itself, is a political statement.

Other will argue that the "least worst" option should be exercised. But that is highly unsatisfactory, and self-defeating. In that the elections will be treated as a proxy opinion poll, there is no advantage in voting for the natural choice – the Conservative Party - which has a leader with whom I do not agree, do not accept and, of whom I have nothing but the most profound contempt. How in all honesty can I vote for a party led by this man?

The issue is brought to a head by the recent members' panel survey by Conservative Home which finds that 68 percent of members wanted a commitment to returning responsibility for fishing and aid policies to member states "definitely" to be included in the next Tory manifesto, with another 19 percent saying "maybe". This compares with a mere seven percent who said "probably not" and a minuscule four percent who said "definitely not".

The survey result, says the editorial, "reveals a big appetite within the Tory grassroots for practical measures to address the continuing loss of British sovereignty to the EU."

In my own remarks, I add that "fishing" effectively represents the "litmus test" on the EU. The CFP is unreformable, to which effect Michael Howard personally authorised the publication of (a much ignored) opposition green paper on fishing policy, written by Owen Paterson when he was fisheries shadow minister.

That set out a measured alternative to the CFP, on which the Conservative policy of seeking repatriation of the CFP was endorsed - having already been agreed by two of Howard's predecessors, Hague and IDS.

Since the accession of the Boy King, however, we have had no commitment that the repatriation policy is to be continued and there is every indication that it will not. The "green paper" has been buried and the current spokesmen talk vaguely of "reform" - which isn't even on the table at EU level.

It is "small" issues like this, I suggest, that engender much of the suspicion of the Boy King - who does not even have the guts to confront the fishermen (and the nation) outright, and tell them he is considering (if he has not already done so) pulling out of previous Conservative commitments, leaving us in limbo while one of his "reviews" looks at the issue.

Why should the issue be reviewed, when it was subject to one of the most fundamental technical reviews possible by Paterson and his team, the basics of which can hardly have changed since the review was carried out?

Yet, without a firm commitment from the Boy King on fishing, the fact of the matter is that Conservative Party policy is going backwards on the EU, regressing to a more Europhile stance which - as the survey suggests - is contrary to the wishes of its members and supporters. I thus conclude, "Why should we support a man who is prepared, so arbitrarily, to ignore those wishes?"

That remains the issue. In the final analysis, if we are ever to make any breakthrough in redefining our relationship with the EU, then it is going to be achieved via a Conservative government. And if its leader is not even prepared to put the issue on the table – or even entertain discussion on it – then we are nowhere. In my view, therefore, abstinence is the only option.