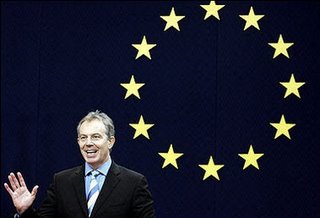 My tongue-in-cheek posting about Polish trains takes on a sharper focus with the news this morning in The Daily Telegraph that the EU budget agreed by Tony Blair last December is £20 billion more than admitted at the time, for which hard-pressed British taxpayers will have to find another £2 billion.

That puts the total spending for the EU in the financial period 2007-13 in excess of £600 billion. The extra sums, as David Rennie helpfully explains will go on "outside instruments".

These include the European Development Fund, a € 22.7 billion slush fund to "help" former European (i.e., French) colonies, the EU Solidarity Fund, an emergency fund to help member states and applicant nations who suffer major disasters, such as floods – as long as the floods are not in Britain – and the Emergency Aid reserve - a fund for humanitarian emergencies, such as earthquakes, worth a total of €1.547 billion.

There is also the "flexibility instrument", intended to redirect surpluses from other budgets to special areas of need, and limited to €200 million and the Globalisation Adjustment Fund, to compensate (Italian) workers who lose jobs to globalisation. This will cost €3.5 billion over seven years.

All this invokes a pained leader, headed "Impoverished by the EU", in which the Telegraph notes that with, "a billion here, a billion there", this "pretty soon it starts to add up to real money!"

To put the sums in perspective, the paper notes that the additional amount conceded by Blair last December, £7 billion, is equivalent to the total police budget for England and Wales. The United Kingdom's annual gross contribution to Brussels, £12 billion, is equivalent to the combined revenue raised by inheritance tax, capital gains tax and stamp duty. We are, in short, it says, paying in an awesome amount of money.

"And what are we getting in return?" the paper asks, somewhat rhetorically. Well, apart from reconditioned Polish trains (which the Telegraph forebears to mention), we are told that our Parliament is hobbled, our countryside ruined, our fishing grounds plundered, and our businesses are asphyxiated with regulation.

Small wonder that, as The Business reported yesterday, the only real expansion in the British economy – which is otherwise growing at a meagre two percent or so a year – is in the underground or "black" economy.

In 1979, Sir William Pile, then chairman of the British Revenue Board, produced the first modern estimate of tax evasion and found that "it was not implausible" that untaxed earnings equalled 7.5 percent of UK GDP, while the American economist Edgar Feige thought the true figure was closer to 15 percent. Another analysis, produced in 1997 by Deloitte, estimated that the underground economy was worth 12 percent of UK GDP and reduced income tax revenues by one-third, while a review published two years ago in the Economic Journal found estimates ranging from 5.5 to 13.2 percent.

However, Friedrich Schneider, of the Johannes Kepler University of Linz, one of the world's top experts on the subject, believes that the shadow economy as a percent of the "official" 2002-03 GDP in Britain was 12.2 percent.

This does not include criminal activities and only concerns market-based legal production of goods and services that are deliberately concealed from public authorities to avoid paying income, value added or other taxes or national insurance contributions; to avoid having to meet certain legal labour market standards, such as minimum wages, maximum working hours, safety standards; and to avoid the other kinds of red tape with which the official economy is burdened, such as legal requirements to fill in statistical questionnaires.

"An increased burden of taxation and social security contributions, combined with labour market regulation are the driving forces of the shadow economy," Schneider argues. Other variables include the population's attitude to the morality or otherwise of paying tax.

Therein lies the true response of the British people – no demonstrations, no revolutions but simply a quiet, progressive opting out of the state system, wherever the opportunity affords itself. An increasing number of people no longer believe that paying tax is a moral obligation, and take whatever measures are necessary to avoid contributing to the system.

There is some synergy here with Daniel Hannan’s op-ed in the Telegraph where, against the background of the Italian election, he argues that people are progressively taking the view that elections don't affect the things that truly matter, and may therefore be treated as an enjoyable public spectacle.

"If your vote won't change anything, you might as well give it to the most entertaining candidate: the one who calls his opponents 'bollocks' and compares himself to Jesus, for example," he writes. "When we politicians can no longer effect meaningful change, we become parasites. Ceasing to be authoritative, we become contemptible."

One final straw in a wind that is set to reach hurricane force is a piece in the Sunday Telegraph yesterday, which records that, in 2004, 145 people were killed in 23,714 hit-and-run incidents while, in 1997, there were 119 deaths in 18,357 such crashes. This is a 22 per cent increase in deaths and a 30 per cent rise in the number of hit-and-run crashes.

Furthermore, there are as many as 700,000 cars on the roads illegally because they are not properly registered with the Driver and Vehicle Licensing Agency database, with more than a million uninsured drivers on the roads, and many more are using cars without a driving licence.

This is simply a different side of the same coin. As the laws get more and more draconian, and compliance becomes more expensive, larger numbers of people simply opt out of the system completely and take their chances. More than ever before, we are seeing a fragmentation of the nation, where those who can – or have least to lose – are taking one look at the society we have created, and are deciding that it is not for them.

And, when we see the waste, the profligacy, the injustice, the corruption, and then Blair's incredible generosity – with our money – who in their right mind can blame them?