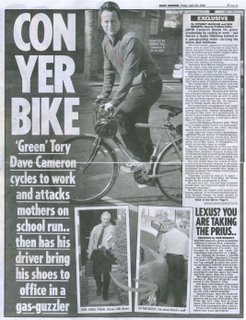 Just when the NuLab experiment is folding, with the distinct air of fin de siècle, was the time when we needed a powerful, credible opposition, with a leader who was totally on top of his brief.

Instead, we have the Boy King – or should we now call him the "Fraud King"? Nailing his colours to the environ-mental mast was always a high-risk strategy, on an issue that takes on quasi-religious tones. To appeal to the "true believers" was always going to require an element of personal commitment, if the "greener than thou" agenda was going to stick.

But the crumbling at the edges was already apparent when the Fraud King chose to fly to Norway for a communion with the "wrong kind of glacier", via an eco-friendly dog sleigh. Instead of a scheduled flight, he chose the luxury and convenience of a ten-seater business jet, dumping 50 tons of carbon dioxide into the atmosphere.

As if that wasn't enough, then there was the debacle of his choice of a gas-guzzling Lexus, carefully hidden behind a hanger as the Boy posed with "cleaner greener" Noddy cars.

But, throughout this, there has been the iconic routine of the Boy peddling to work on his eco-friendly bicycle, demonstrating his personal commitment to improving the environment. Now this has turned out to be a charade – with his gas-guzzling, chauffeur-driven Lexus following on behind, carrying a clean shirt, a pair of shoes and a briefcase. "Eco-chic” has turned to "bull-chic".

This cannot compare with the cavortings of Johnny "two-shags" Prescott, the serial incompetence of Charles Clarke, or the stunning ineptitude of Patricia Hewitt, but it nevertheless fatally weakens the credibility of the Boy on the ground of his own choosing. It was an entirely unforced error that will rebound with an electorate which dislikes hypocrisy in its politicians.

Above all, its shows that the Fraud King cannot be trusted. If his "flagship policy" is a charade – all spin and no substance – what price any of his other policies? In opting for cheap gestures, he has further diminished the standing of politicians, and added to the general contempt which the breed attracts.

Whenever the Boy now raises his "green" agenda in public, he will be the object of amused derision – fatal to the reputation of any wannabe serious politician. He is dead meat. And that put the anti-EU agenda further down the line than it has been in living memory.