Couldn't have put it better ourselves 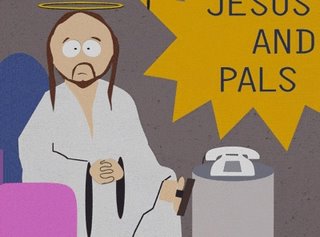 Some, if not necessarily all, of our readers would have followed the growing self-censorship over Islam and Mohammed in North America as well as in Europe. (I was hoping to hear less about “Eurabia” as a result of it, but clearly that is not to be. When it comes to self-righteousness it is pretty evenly spread across the two continents.)

In the wake of Comedy Central censoring its episode of South Park that was to depict Mohammed and the Borders chain of bookstores refusing to carry copies of a magazine that reprinted the Danish cartoons, the blogosphere has been up in arms. (Well, at least, they do have a strong and politically active blogosphere.)

This is how TigerHawk puts it:

“So I don't blame Comedy Central, or Border's Books, or the world's media organizations, for refusing to depict Mohammed out of fear of retaliation. Their job is not to defend freedom of speech, but to earn profits for their stockholders. Acting as a fiduciary, I would make the same decision. But let us not tolerate these same organizations claiming that they also support freedom of speech. They are lying when they say they do, because in order to defend freedom of speech, you have to be willing to protect speech against the inevitable threat of violence.”

He is slightly wrong about the world’s media organizations. Quite a few in Europe, even in Asia and the Middle East and one or two in North America did stand up for freedom of speech. Sadly, no part of the MSM in Britain and hardly any in the United States.

All the same, TigerHawk is right: it is not unreasonable to be afraid but it is entirely not reasonable to pretend to care for free speech and to run away without firing a shot as soon as the enemy appears on the horizon.