A climate of fear 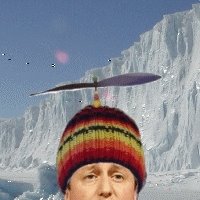 As the Boy King trogs off to look at a melting glacier in Norway, the Wall Street Journal (Opinion Journal) yesterday offered an intriguing piece under the title "Climate of Fear", written by Richard Lindzen, the Alfred P. Sloan Professor of Atmospheric Science at MIT.

His thesis is that global-warming alarmists intimidate dissenting scientists into silence, who in turn are bolstering junk science to support alarmist claims about global warming. But, worst of all, writes Lindzen, scientists who dissent from the alarmism have seen their grant funds disappear, their work derided, and themselves libelled as industry stooges, scientific hacks or worse. Consequently, lies about climate change gain credence even when they fly in the face of the science that supposedly is their basis.

Alarm rather than genuine scientific curiosity, Lindzen concludes, is essential to maintaining funding. And only the most senior scientists today can stand up against this alarmist gale, and defy the iron triangle of climate scientists, advocates and policymakers.

The worrying thing, of course, is that this phenomenon has been prevalent for some considerable time, and now covers a vast range of scientific activity.

I, myself, had personal experience of it when I was researching for my own PhD, carrying out a study of the quality of public-sector investigation of salmonella food poisoning.

My thesis was that, since huge tranches of public policy were based on the findings of public-sector investigators, the effectiveness of the policy depended, to a very great extent, on the accuracy of the conclusions drawn from investigations. It was, therefore, of some interest to measure that accuracy.

I chose as my focus, the enormous number of what were known as "egg-associated" food-poisoning outbreaks, re-investigating sixty of those which had been definitively reported by the authorities as having been "caused" by salmonella-infected eggs.

Not least, I seem to have discovered a new type of salmonella, one which – from data supplied in official records – was capable of causing illness before it had been consumed. This arose from five of my re-investigated outbreaks, where illness had occurred in the cohort before the eggs, which were subsequently attributed as the cause of the outbreak, had been consumed. In one case, illness had been detected three days before the eggs had even been delivered to the restaurant which became the focus of infection.

My general finding was that investigators tended in each case to formulate an a priori causal hypothesis, and then directed their investigations to supporting those hypotheses, discarding any information which refuted them. Much public money could be saved, I suggested, if they did not bother carrying out any investigations at all, but simply published their hypotheses as fact, the moment outbreaks were discovered.

However, the specific issue, relating to Lindzen's assertions, is that I had picked up on this theme as part of my general work and then sought to do a structured study within a university environment, as part of a PhD research project. Yet, when I approached a number of universities to take me on, intrigued as they were by my hypothesis, none would touch it. It was far too "risky" and contentious.

Eventually, one courageous department head did take me on (albeit, as long as I found my own funding), and became my supervisor. But it nearly cost him his department where most of the research work was financially supported by the then Ministry of Agriculture, Fisheries and Food (MAFF).

On day, out of the blue, he was summonsed to London to attend what he thought was a review meeting with MAFF, to find himself ushered into a room packed with officials whose only interest was my research. My supervisor was told that it was "incompatible" with the other work being done in the department and either mine would have to go elsewhere, or funding would be withdrawn.

Eventually, a "deal" was stitched up, where it was agreed that I should be "quarantined" within the department and have no access to any MAFF-funded research – and nor would the department publicly support my work. It was a close run thing as, had funding been withdrawn, the department would have had to have closed down.

That experience, as Lindzen is indicating, is now the norm. Academia, far from being the repository of independent research, has been bought and paid-for by the political establishment, prey to lobby groups, its task to reinforce policy decisions and keep out dissident thought.

Behind all that is the EU, which controls much of the science funding in European universities, and has an almost total grip on political research, through its Monnet programme and its "framework" funding system. That is also true of climate science, which is in the grip of what Lindzen calls the "iron triangle of climate scientists, advocates and policymakers", bolstered by an ignorant and indifferent media which is interested only in the cheap, alarmist headline.

The idea of "independent" science, therefore, has become a hollow joke. As Lindzen rightly points out, it has been replaced by a "climate of fear". And it is that which, as he gazes at his melting glacier, the Boy King has bought into.