One shouldn't gloat, but… 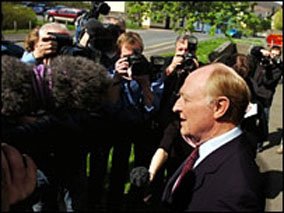 With Johnny "two shags" Prescott being dobbed in for having an affair with his secretary, you would have to have a heart of stone not to giggle inanely at the misfortune that has befallen his former boss, ex-leader of the Labour Party Neil Kinnock.

The "Welsh windbag" has been up in court today in Abergavenny, south Wales, to be banned from driving for six months after admitting two speeding offences which brought over the limit on the "totting-up" procedure.

What makes this all the more delicious is that Kinnock is an ex-European transport commissioner, and the man took the opportunity to underline the hypocrisy of his own stance by declaring to reporters after the case, that "speeding is a killer and I have campaigned all my life against speeding," adding, "If you break the speed limit you can expect to be punished."

At the hearing, he was also fined £800 with £43 costs, which should not trouble him much on his £75,000 commissioner’s pension. Asked how he would cope with being banned from driving, he answered: "I'll manage, with difficulty, but I'll manage".

Here, one must have a little sympathy. Forking out for a chauffeur might be a little more costly - although I am sure Glenys can help out from her MEP’s salary. But you have to question Neil's timing. At 64, had he managed to hold off the prosecution until next year, he would have qualified for a free bus pass, which would have saved him a bob or two.