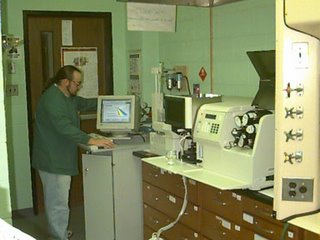 As British politicians fall over themselves to demonstrate their "greener than thou" credentials – the Boy King having to burn off 50 tons of fuel in his private jet to Oslo, in order to enunciate them – thousands of small businesses in Scotland are having to come to terms with the reality of the obsession with environmentalism.

These are the businesses which have the misfortune to have their own private water supplies and, as we learn from the Scottish Herald, they are going to have to fork out annually an average of £600 each to test their supplies in accordance with the latest amendment of the EU's Drinking Water Directive, looking for up to 70 different bacteria and chemicals.

Says the Herald, small bed-and-breakfast establishments, coffee shops and other tourist facilities will be affected, and their woes do not stop with the testing fees.

As is so often the case, in amending the Directive – originally promulgated in 1980 as 80/778/EEC - the EU has ramped up the standards, slashing the allowance for lead from 50 µg/l to 10 µg/l, introducing more stringent values for certain pesticides, which must be measured down to 0.03µg/l, reducing copper from 3 to 2 mg/l and phasing in some new standards for "parameters" such as trihalomethanes, trichloroethene, and tetracholoroethenes.

Many of the levels set for existing parameters are based on WHO standards, supposedly on the assessment of a "notional significant risk to the health of a consumer", usually over a lifetime of consumption. However, there is little evidence to support any claims of health risk at the levels set for the majority of so-called contaminants – many of which occur naturally - yet still the levels have been ramped up, imposing considerable extra compliance costs.

An independent economic assessment carried out for the Scottish Executive has estimated these costs are likely to vary from £500 to in excess of £10,000, averaging around £1150 per supply affected. Against this, there are grants of 50 percent available, up to a maximum of £800, from the executive.

Despite the costs, which will affect the supplies of approximately 150,000 people in remote parts of Scotland, and tens of thousands of visitors, there is no evidence whatsoever of any systemic problem or ill-health arising from pre-EU standards, with were imposed on an ad hoc basis by successive public health acts.

In my days in Yorkshire, testing private water supplies, this was very much simpler and cheaper, and funded entirely by local authorities, which did the work in the broader interests of public health - an option which is no longer permitted.

Now, for many of the operations affected, they will be saddled with absurd costs and few have any possibility of obtaining mains supplies. Yet Brussels has decreed that they shall be better protected. And "protected" they shall be, even if, as is feared, a substantial number of small businesses become ex-businesses as a result.