What on earth is happening in West Africa? 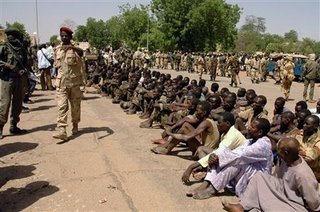 As the situation in Chad hangs on a knife-edge, it is quite remarkable that, while world-wide protest at US involvement in the Middle East continues apace, the complaint from West Africans seems to be exactly the reverse – why is the US not getting more involved?

That is the thrust of a very long piece from the Sudan Tribune today, which picks up from an editorial in the Washington Post which itself asks, "Is [the Bush administration] only weak and incompetent, or is it two-faced [in its Darfur policy]?"

The editorial complains of "a lack of meaningful US policy for Darfur and eastern Chad, with the bleak diplomatic prospect that US leadership will be lacking as the Darfur region enters its period of greatest and most remorseless human destruction."

It tears into the "various posturing comments" by Bush about a significant NATO role in Darfur, which contrast with statements from senior NATO officials in Brussels that indicate that the role of the Alliance will in fact be highly limited. The Bush administration, it says, has not invested the political and diplomatic capital necessary to sway the Alliance, which moves by notoriously slow consensus.

To a certain extent, this misses not one but several points, not least of which is that Africa is largely regarded as Europe's domain, when it comes to intervention, and the former European colonial powers – and especially France – are not minded to look for or accept US leadership.

Thus, more relevant are the comments by the Tribune on the European members of NATO, their response to the Darfur crisis being described as "feckless and shameful". France, Germany, Italy, the Benelux countries, Spain, and the countries of Eastern Europe have all been essentially useless in crafting a meaningful Darfur policy. Even the Blair government in the UK, it says, has done little more than exhibit the occasional spasm of moral indignation.

Venom is also directed at the European Union, which "seems to believe that its partial funding of the African Union mission in Darfur exhausts obligations in the face of genocide."

The Tribune reminds us that the EU parliament voted by a margin of 566 to 6 in September 2004 to declare that the realities of Darfur are "tantamount of genocide", a disingenuous turn of phrase evidently meant to avoid the explicit judgement of "genocide," evidently freeing the many signatories to the 1948 UN Convention on the Prevention and Punishment of the Crime of Genocide from their various contractual obligations, pre-eminently to "prevent" genocide (Article 1).

Nonetheless, it adds, European acquiescence before genocide (or realities "tantamount to genocide") in Africa remains conspicuous.

It says a great deal for the expectations of the Europeans and the EU that the Tribune thus focuses on the Bush administration and its ongoing failure to respond seriously to Darfur. It holds as one of the consequences of this US failure that Khartoum's genocidal ambitions have "bled into neighbouring Chad" and that Khartoum’s unconstrained support for Chadian rebels has brought the tenuous government of president Idriss Déby to the very brink of collapse.

Though Chadian officials claim that the rebels are being defeated, says the paper, the rebel attack on N'Djamena and the possibility of large-scale army desertions ensure that the military situation is far from resolved. Certainly Khartoum's National Islamic Front (NIF) has a strong interest in seeing the rebels succeed in toppling Deby’s government, and in bringing to power a new government that will be beholden to Khartoum, as Déby himself was when he came to power in a 1990 coup.

The Tribune then offers a detailed account of events that I have not seen bettered elsewhere, pointing out that the recent rebel invasion of Chad clearly has the backing of Khartoum and that attacks by Khartoum’s murderous Arab militia allies, the Janjaweed, "appear to be co-ordinated with those of the Chadian rebels".

While recognising that Déby is a far from satisfactory leader, given the extreme security crisis in West Darfur state, instability in Chad poses the real prospect of a massive escalation of the humanitarian crisis already affecting this troubled region, with thousands of refugees – who are these only to escape the murderous attentions of the rebels, once again prey to their vicious attacks. Under attack from the rebels, Déby is redeploying his military resources in a bid to retain power, leaving the refugees unprotected, with potentially disastrous consequences.

To supplement the wholly ineffective African Union force in the region, it is estimated that a serious peacekeeping force would require 20,000 or so troops would be needed, and the Tribune is looking to the Bush for such a deployment, rather than the token force of "several hundred" NATO advisers so far proposed.

It is, however, recognised that, short of sending its own troops, the US would struggle to persuade allies to commit so many troops and a NATO officials has said that military planners were looking at dozens rather than hundreds of NATO experts to support the African Union. "This is how Europe would respond to the urgent security needs of civilians in Darfur and eastern Chad, as well as the humanitarians providing a critical but highly tenuous lifeline," the Tribune notes bitterly.

As for the United Nations, its pitiful efforts are dismissed as a reflection of the "broader international cowardice", where the "other actors within the international community are also abjectly failing Darfur". Efforts to stop atrocities in Sudan's Darfur region are unraveling, "with a new peacekeeping force uncertain, relief aid under attack and UN sanctions stymied", while Kofi Annan's special representative for Sudan, Jan Pronk, "continues to demonstrate a foolishness and perversity of instinct that has consistently undermined UN policy on Darfur".

Here, Pronk's malign influence is summed up from a series of Reuters reports, recording that Pronk has warned that any mention of NATO was a red flag to Muslims. Presumably, the Tribune adds:

Pronk doesn't mean here the Muslims being slaughtered in Darfur because of their ethnicity. They have made abundantly clear in a host of ways that they would eagerly welcome NATO or other international troops to protect them, their families, and the possibility of their resuming meaningful lives. Pronk himself has recently called for a force of 20,000 troops: where does he propose that they come from? And does he imagine that countries other than those within NATO can provide the kind of sophisticated military presence, transport capacity, intelligence, and tactical air support that Secretary-General Annan has explicitly called for? It is Pronk who is the fool, a status he has confirmed repeatedly over the past two years.

It was Pronk who was responsible for negotiating away in August 2004 the only meaningful UN Security Council "demand" that has yet been made of Khartoum, viz. that the regime disarm the Janjaweed and bring its leaders to justice. In place of this singularly important "demand" Pronk negotiated instead (also in August 2004) a plan for "safe areas" in Darfur, one that proved as ill-conceived as the "safe areas" plan for Bosnia (it was quietly abandoned by the UN shortly afterwards when it became clear that "the plan" did nothing but offer Khartoum diplomatic cover for its expanding military offensive along the Tawilla/Gereida corridor).

Pronk has also at various points perversely refused to accept the overwhelming evidence that Khartoum has recruited, supplied, and consistently militarily coordinated with the Janjaweed---evidence that was most authoritatively assembled by Human Rights Watch in December 2005 ("Entrenching Impunity: Government Responsibility for International Crimes in Darfur"). And it is Pronk who has also proved adept at angering many within the UN community working in Sudan by insisting on assuming responsibilities that are neither his nor within his competence (an excellent example is Pronk's highly unjustified insistence on taking a leading role for himself in the critical Assessment and Evaluation Commission for the north/south peace agreement; see International Crisis Group, "Sudan's Comprehensive Peace Agreement: The Long Road Ahead," page 27).

In speaking so foolishly and in such cowardly fashion about the need for robust humanitarian intervention, including use of NATO forces - precisely what has been called for by the UN Secretary-General - Pronk ensures only that the chances of deploying any force, even of the sort he himself has vaguely called for, are increasingly remote.

And so it goes on in what the Tribune calls "a perfect storm of human destruction", predicting that, in addition to Darfur, "Eastern Chad is also poised to become a nightmare of human destruction and deprivation." Unless something dramatic is done, and done soon, whatever is done will make no difference to the people of Darfur and eastern Chad.

The paper thus lays the ultimate responsibility on the Bush administration and that, in itself, is the ultimate condemnation of the European Union. For all its protestations of a global reach and its prating about the ascendancy of "soft power", when the chips are down, its utter uselessness is so evident that even that does not warrant comment.

A Continent that fielded millions of men for its own armed conflicts – and roped-in millions more from its then colonies – is now reduced to bickering over the deployment of 1,000 men for an "over the horizon force" in the DRC, and cannot even contemplate fielding a mere 20,000 to prevent a certain humanitarian disaster.

Whatever the ultimate responsibility of the US, those who so easily and proudly call themselves "Europeans" should be thoroughly ashamed.