Beginnings of the Union Flag 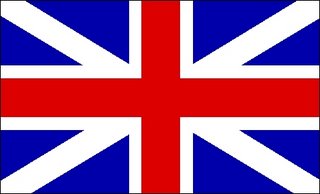 Today marks the 400th aniversary of the decree issued by King James I of England and VI of Scotland that united the Cross of St George (red on a white background) and that of St Andrew (diagonal white on a blue background) in the first version of the Union Flag.

The Cross Saltire of St Patrick (diagonal red cross on a white background) was added after the Act of Union and the Union Flag as we know it now was first flown on January 1, 1801.

Why no Welsh Dragon? Simple really. Wales, a Principality, had, by 1606, been a part of England for several centuries.

One thing that has always puzzled me is how do people know when the Union Flag (or Union Jack) is flown upside down, which a sign of distress. As far as I can make out after careful scrutiny it is completely symetrical. It seems, that I had better go on scrutinizing it a bit more. According to the Buckingham Palace press office:

Why is it sometimes called the Union Flag and sometimes the Union Jack? On the whole, we accept that it is the Flag on land and Jack on the seas. But there seems to be some doubt as to the origin of the words Union Jack.

“The term Union Jack possibly dates from Queen Anne's time (reigned 1702-14), but its origin is uncertain. It may come from the 'jack-et' of the English or Scottish soldiers; or from the name of James I who originated the first union in 1603, in either its Latin or French form Jacobus or Jacques; or, as 'jack' once meant small, the name may be derived from a royal proclamation issued by Charles II that the Union Flag should be flown only by ships of the Royal Navy as a jack, a small flag at the bowsprit.”

The British are not, on the whole, a flag-flying nation, having not felt the need for it in the past. Indeed, one of the most telling episodes in Kipling’s “Stalky and Co” is that describing a visit to the school by a politician who talks much of the flag and even produces one from his breast pocket. The boys, staunch patriots every one, feel besmirched by his flag-waving.

There are times when flags are in order. One of those was the Queen’s Golden Jubilee celebrations in the Mall, that was a sea of flags: Union Flags, English flags, Scottish and Welsh flags, Canadian, Australian and various African flags, even one solitary and very stylish Isle of Man flag.

After 7/7 I noticed that the Union Flag was flown more frequently than is usual, it being controlled by carefully laid down rules. In time of trouble, the flag was being used as a symbol of defiance.