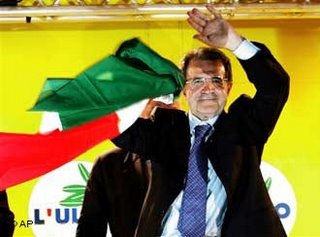 By all predictions Romano Prodi should have walked into the job of Prime Minister. Berlusconi was described as a “buffoon”, his premiership “controversial” (though, actually, he got there by winning elections); the economy is in a horrible mess, Berlusconi’s own business dealings have fallen a long way short of anything that can be described as transparent. And yet, and yet.

Any normal person would consider this to be a serious failure for Prodi. Not so, Prodi himself and his followers. According to Deutsche Welle:

“The result automatically gave Prodi's group a majority of at least 340 of the 630 seats in the lower house, leading the man known to Italians as "the professor" to claim victory.

"Today, we have turned a page," Prodi told an ecstatic crowd from a stage outside the headquarters of his Union coalition in central Rome.

"We will always be united. We will govern for five years," he said.”

When he says “we will always be united” he, presumably, means for the next week or so. But a new page? Ecstatic crowds? As I said, a rum lot.