Back in the real world 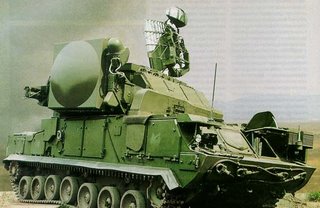 For those who can tear themselves away from the gripping drama of the Boy King communing with glaciers, out in the real world there are still, fortunately, some grown-ups minding the shop.

This we hear from AFP, via DefenseNews (no link), which tells us that the US is applying pressure on Russia to cancel a contract to deliver SA-15 Gauntlet anti-aircraft missiles to Iran.

As we pointed out earlier, here and here, these missiles would give Iran a quantum improvement in her air defence capability and severely restrict the attack options, should either Israel or the United States chose to neutralise Iran’s nuclear capability by means of air strikes.

AFP cites as its source the Russian Vedomosti daily, which claims that, "Observers say that under pressure from the United States, Russia could cancel this deal and are already saying that it has been suspended." This paper in turn cites "a political analyst close to the Kremlin", Sergei Markov, saying that delivery of the air defence systems had been delayed until the autumn out of consideration for US worries.

However, the paper also referred to "a source close to Russia's arms export agency", Rosoboronexport, saying that the delay in fulfilling the order - originally signed last November - was due to the need to train personnel.

"The deal with Iran could only be broken in the event of the purchaser failing to pay. Cancellation of the contract under pressure from the United States would damage Russia's reputation as an arms exporter," the paper quoted an analyst, Konstantin Makiyenko of the centre for Analysis of Strategies and Technologies, as saying.

Under the contract, signed in November, Iran is to pay more than $700 million for 29 of the sophisticated short-range air defence systems and their delivery, if it happens, will change the strategic balance in the Middle East, for the worse.

One dreams occasionally of the Boy King raising such issues, and even calling on our government to lend support to the US in preventing this development. But, as long as we have a man that seems to be more interested in what we do with our kettles, I suppose that dream will remain filed under the category "fantasy".