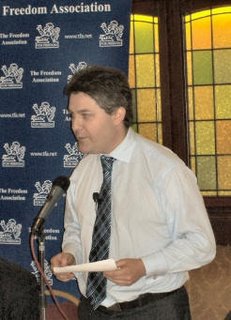 The current furore over the release of more than 1,000 foreign offenders, who should have been considered for deportation, more than adequately illustrates how domestic politics will always completely submerge EU issues.

One wonders, incidentally, whether the home secretary, Charles Clarke, is aware that it is national "real nappy week", given that he is probably in urgent need of considerable quantities of the product at this time.

The problem for this Blog, however, is that while national events (in this case rightly) take centre stage, other developments – some of considerable long term-importance – are consigned to the margins.

Such is the bald pronouncement yesterday by the Boy King, reported today in The Daily Telegraph that Eurosceptic MPs are not welcome in his team.

According to the Telegraph report, Cameron "threw down the gauntlet to Eurosceptic Tory MPs" by declaring that anyone who advocated withdrawal from the European Union would not serve on his front bench.

This came on the eve of the launch by Philip Davies, the Conservative MP for Shipley, of his "Better Off Out" campaign to which he has invited nearly 50 of his party colleagues and two Labour MPs. But, as Tory Diary suggests, many of those MPs who might have been tempted to attend to might be discovering last minute diary clashes.

What the Boy King's intervention effectively means is that critical discussion of EU issues are now effectively banned within the Conservative parliamentary party, other than by "no hopers" who have no ambitions for office or who have already been passed over. In one fell swoop, discussion of the EU has been consigned to the margins.

However, long after the furore over the incompetence of the Home Office has died down, and Clarke has either been forced to resign – or not – the EU will continue to exert its baleful effect on the body politic, and our national life. But the Boy King has now ensured that it will be discussed even less that it is at the moment.

Talking this over with a UKIP spokesman this morning, he expressed some satisfaction at the development. The Boy King had, effectively, declared his support for the EU, which served as a wake-up call for those who believed the Boy might harbour Eurosceptic tendencies. It would also, he felt, drive more Tory activists into the UKIP camp.

Thus, while the Boy is making hay with the current crisis, behind the scenes, he has dealt another blow to political process, declaring a whole tranche of public policy "off limits". In its way, that is as damaging, if less spectacular, than releasing convicted criminals onto the streets.