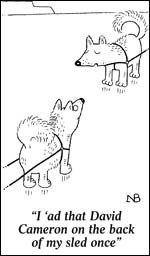 Just like the behaviour of some truly embarrassing member of the family, the antics of the Boy-King of the Conservative Party would, we were hoping, stay within this country. After all, why should anybody else be interested in all this stuff?

Sadly, that was not to be. The American Thinker, for one, has noted the Great Expotition to the Glacier. Describing the British Conservative Party as hapless, the posting refers back to the Daily Mail for the true environmental cost (if you believe in these matters, as the Boy-King appears to do) of the trip was:

“Unfortunately before he jumped on his canine caravan in Norway, Mr Cameron had been driven from London to Farnborough, Hampshire by Government car.

Over the 38-mile journey his Vauxhall Omega spewed out 30lb of carbon dioxide. At Farnborough, he boarded a ten-seater private jet, which flew him and his entourage to Longyearbyen, Svalbard.

That trip, covering 1,909 miles, deposited five tons of CO2 per passenger into the atmosphere.”

And then he saw one glacier that is retreating, without bothering to look at the various others that are advancing. But, never mind. We are told by the co-ordinator, the World Wildlife Fund – UK (I didn’t realize glaciers counted as wild life. You learn something new every day.) that the Conservative Party will have to contribute £200 to some renewable energy projects in order to offset all that carbon dioxide. This whole enterprise becomes madder by the minute.

As Vasko Kohlmayer says on The American Thinker:

“The whole Norwegian episode would be rather funny and amusing had it featured as protagonists the Left’s usual suspects. But these are the British conservatives who have not only lost their bearings, but – it would seem – also their sense of dignity and self-respect.