How does he define good news? 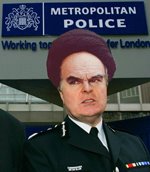 Plod Blair, one of this blog’s favourite cartoon characters, has told the Metropolitan Police Authority (MPA) that his annual report is “largely a good news story”. One wonders whether he is on the same planet as the rest of us?

Here are the figures that, according to him constitute that “good news story”:

I expect most of our readers will notice something rather interesting about those figures. Here is the full story on One London.