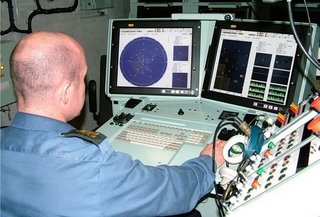 Tucked away in Booker's column today is a story that could (and should) easily have made the main news section of any quality newspaper, and thence precipitated a right royal political row.

Headed, rather lamely, "Sonar lost us £300m", this picks up on a story we did last month about the development of the world-beating sonar 2087 for the Royal Navy. Writes Booker:

When history comes to give its verdict on the Blair Government, high on the charge sheet will be the wholesale selling out of our Armed Forces and our defence industry to the cause of European integration.

UK taxpayers, he tells us, put more than £300 million into the procurement of the equipment (in fact, £389 million) from Thales UK, and the Navy has recently taken delivery of eight sets for its Type 23 frigates, at £9 million each. By that reckoning the development cost amounts to a cool £317 million. This latter sum is effectively the "intellectual property", representing the knowledge cost of building the system from scratch.

When we contacted the MoD, we learned that the intellectual property of defence contracts is always left with the contractor and were referred to its policy statement on intellectual property which states, inter alia, that MoD funded work "should be fully exploited not only for defence purposes but also for the benefit of the wider UK economy".

To protect the taxpayer, a levy is applied to any sales to third parties, at a standard rate of 7.5 percent of the price charged – up to £15 million – or on a profit sharing basis for more valuable contracts.

Thus, ownership of the intellectual property relating to sonar 2087 now resides with Thales UK. This is all very well and good, except for the fact that the company is not British, but wholly French-owned. Furthermore, that compnay has decided to lift the designs to produce the sonar for the French Navy which it can sell at a knock-down price as the British taxpayer has funded the development – any levy or profit-sharing hardly compensating for the huge initial sum.

In other words, writes Booker, "the UK taxpayers have made a free gift to Thales of more than £300 million." He adds, "No doubt our French friends are very grateful for our generosity. But in business terms, one has to ask what on earth the MoD thinks it was up to."

This, incidentally, makes a stark contrast with the MoD’s recent decision to cut war widows' pensions if they sue over their husbands' deaths and successfully gain compensation. No doubt, they will fully appreciate our generosity to the French.