So do the children play 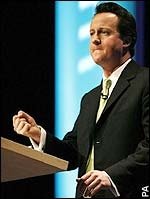 One cannot but help enjoy Simon Heffer's robust defence of UKIP in the Telegraph today but only in the sense that he points up the utter fatuity of the Boy King's hijack of the Conservative Party. Says Heffer of the Cameron "bratpack":

They are repositioning their party in much the same fashion as Senator Ted Kennedy used to reposition cars after a night's boozing. It's all very well abusing your core vote, provided you can find others to vote for you instead: but the UKIP blunder has simply served to remind everyone of Dave's inexperience, stupidity and shallowness, and that is hardly going to help drum up support.

That shallowness was much in evidence at the Conservatives’ spring conference in Manchester, when "shallow Dave" – whom I half expected to be wearing a windmill on his head – sought to position his metropolitan obsession with the "environment" at centre stage. Said the Boy King,

We must become the party that offers young families a vision of a cleaner, greener, brighter environment. For our generation, the environment isn't an issue on the fringes of politics.

The problem for little Dave is that – as we have remarked before - "environment" is on the fringes of politics. All he is doing, by parading his "green credentials", is showing how utterly out of touch he is with public sentiment. 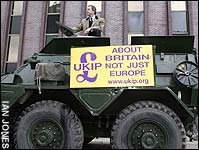 This was demonstrated, perhaps unwittingly, by Nigel Farage who turned up at Manchester, as promised, in UKIP's pretend "tank", the Saracen armoured personnel carrier. For the eco-zealots who have hissy fits about "Chelsea tractors", Farage's chariot would have them swooning in horror. With its 5,675cc, straight 8 cylinder, 160 bhp petrol engine, on a good day, it can just about manage a fuel consumption of 5 miles per gallon.

But away from the foetid, claustrophobic obsessions of party politics, the real world beckons, with the Airbus story given ample mileage in The Telegraph.

This comes with a poignant piece by Roland Gribben who notes that BAE Systems' sale of its Airbus share marks the final retreat of Britain from civil aircraft manufacture. "The industry in the UK," he writes, "in terms of British ownership, has now been consigned to the history books".

This has already been preceded by our retreat from military aviation, which was effectively announced by John Reid in December, and the progressive transfer of military manufacturing to European firms.

This, undoubtedly, has contributed to the state of the economy where, yesterday, we learnt that manufacturing output dropped in February to its lowest level since before Labour came to power in 1997. This is in stark, if sombre contrast with the news that the number of people working in the public sector has risen to almost six million – the highest number on record.

As useless mouths proliferate, Farage in his Saracen outside the Manchester Tory conference hall, was also making another unwitting statement. He was riding in a British-built armoured vehicle, powered by a Rolls Royce engine. If he wanted to repeat the exercise in, perhaps thirty years time – as the forthcoming generation of British army vehicles becomes obsolete – he would be riding in a Swedish-built vehicle, with a French gun and turret, powered by a German diesel.

Inside that conference hall today, however, they are oblivious to such issues. All we get is that crass, vapid, babyish Cameron bleating that he wants "a green revolution". And so do the children play.