The man makes no sense 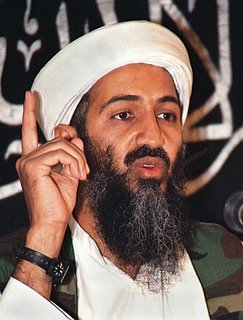 As Al-Qaeda (or so it would appear) strikes in Egypt, blowing up hotels packed because of the holiday season, killing and maiming Egyptians and foreigners alike and trying to deprive those who survive of their livelihood, it might be a good idea to have a look at the latest Osama bin Laden offering. These seem to get more and more rum as time goes on.

Curiously enough, the bearded wonder (referred to by sundry MSM outlets as a Saudi dissident) did not mention that his band of merry brothers was about to bomb an Egyptian town. Must have slipped his mind.

Instead he enlarged on the subject of how he was going to fight Westerners because they were clearly waging a war on Islam. (Not half as much as some parts of Islam wage on other parts.)

Equally curiously, he did not mention Iraq much. Now, this is very odd, as has been pointed out by numerous bloggers. After all, bin Laden announced some time ago that Al-Qaeda was diverting most of its resources to the great battle in Iraq. Whatever happened to that? Could it be that they are actually losing? Perish the thought.

So what was it that has been really annoying the new caveman? It seems he is particularly angry because the West is refusing to support the Hamas-led Palestinian Authority. By not supporting, he really means, as they all do, handing over large sums of money that can be used (when not stolen) to arm lots more “jihadists”. But surely, by not paying for our own destruction, we in the West are beginning to show a certain amount of nous. Bin Laden ought to respect that.

Mind you, as not giving money to Hamas is one of the main reason why bin Laden is threatening further attacks on westerners (especially those who might possibly be in Dahab), then the British should be safe, after Jack Straw’s comments.

Hamas leadership appears unimpressed by bin Laden’s statements. Perhaps, they recall the fact that until well after 9/11 Palestine was not even mentioned by Al-Qaeda. Nowadays, it seems that bin Laden gets his reaction in to the latest news as soon as he can get it down from those mountain caves.

Hamas is not the only area of grievance. Darfur is another. When I first read that I thought he was complaining about the fact that the West was allowing the humanitarian disaster to continue. A little unfair, I thought, as it was Arab Muslims murdering African Muslims but still, as we have written on this blog a few times, it is a disgrace that the UN, which has arrogated to itself the role of the primary source of international law and humanitarian goodness, has done nothing to stop the genocide.

Possibly, I mused, bin Laden is displaying some anger at the Russian and the Chinese who have prevented even the slightest effort to punish the perpetrators of the many crimes.

But I was wrong. Osama bin Laden was threatening all sorts of dire punishments on Westerners for the “Zionist-inspired” possibility of the UN actually sending in some troops to help bring the massacres to an end.

That is, at least, what is being discussed in a rather desultory way in the UN headquarters in New York and up with this the bearded wonder will not put. Or so he says. How dare the West even try to stop the legitimate activity of one group of Muslims when they are murdering and mutilating another group? All part of the war being waged on Islam.

Meanwhile, a big rally is being planned in Washington DC for April 30 to call attention to the situation in Darfur. No wonder bin Laden is mad with the West.