The Indy shows its colours 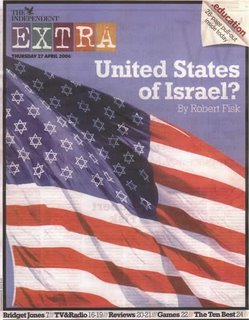 It is not really within our remit to comment on the scandalous paper by John Mearsheimer and Stephen Walt on the Jewish conspiracy behind American foreign policy. A shortened version was published in the London Review of Books, one of those publications the taxpayer subsidizes through a generous, annual Arts Council grant.

Other and better qualified people have discussed the paper and the so-called theory behind it, pointing out the many factual errors and complete non sequiturs. Curiously enough the paper was criticized even by Noam Chomsky. It has, however, been defended by the usual panoply of left-wing talking heads as well as various political anti-semites and, hilariously, the white supremacist KKK man, David Duke. The authors are very embarrassed by this.

However, it behoves us to point to the disgraceful cover of yesterday’s “special” addition to the Independent (there is one every day, I understand) in which Robert Fisk, the man, who thinks that Starbucks is part of a Zionist plot, discusses with all solemnity this theory.