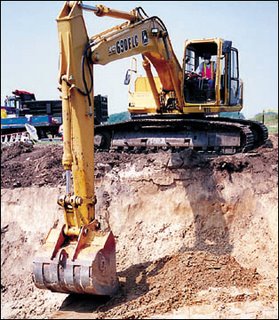 For long enough, it has been the golden rule of politics that, when you are in a hole – stop digging. Yet, while the Boy King is telling his party that he wants it to change, "faster, wider and deeper", it seems that the injunction applies more to hole-digging. His new credo is, when you're in a hole – hire a JCB.

That much is evident from the Boy King's private office, in response to pained letters and e-mails from UKIP members – and many Conservative supporters – complaining at his "racist" attack on the Party. Far from apologising, his correspondence secretary, Alice Sheffield, is crying in aid one Ashok Viswanathan of "Operation Black Vote" (OBV).

There's no doubt that when you talk about the UKIP they're wolves in sheeps clothing... We know that a number of candidates who have stood for UKIP have BNP links - there's no question there are links'. He suggested UKIP had been spreading 'hate and bigotry', adding: 'It's not just about anti-Europe. It's anti-black, it's anti-minority, anti-migrants, anti-asylum seekers. And we should be very clear about that when we vote on June 10th' (Black Information Link 9 June 2004).

One wonders if the Boy King's correspondence secretary has taken the time to look into this organisation before so enthusiastically quoting it for, if she had, she would have found it had some very interesting friends.

Not least, it has been funded to the tune of £10,000 from the European Social Fund, topped up from the EU parliament office with £6,670 with a further £2,000 from Charter 88 and nearly £6,000 from Livingstone's "London Government". It also received an additional £30,000 funding from European Social Fund via the 1990 Trust, which paid the salary of other OBV members of staff. It includes amongst its sponsors, the Transport and General Workers Union and Unison.

By any definition, OBV is a "racist" organisation, actively discriminating in favour of ethnic (i.e., non-white) communities. With heavy backing from EU institutions and their fellow-travellers, it can hardly be relied upon as a non-partisan source for comment about UKIP.

But then the fair Alice is far from being non-partisan about the EU. "We want Britain to be a positive participant in the EU, championing liberal values", she writes:

Britain has an enormous amount to gain through co-operation and free trade in Europe. The EU does much that is worthwhile. It allows people and goods to move freely across Europe. Just as importantly it has brought stability and has helped to entrench democracy in newly free countries.

Coincidentally, in yesterday’s The Times, under the heading, "Silence on Europe will not be good enough", William Rees-Mogg wrote that, if the Conservatives are to regain the trust of moderate Eurosceptics, who are among their own voters, they will have to define their European policy in frank terms.

Well, Alice Sheffield has done the job for them, and cries in aid overtly racist groups to support the line taken against the Boy King's own core vote. Keep digging, Alice... faster, wider, deeper.